As Prime Minister Narendra Modi take the target to make India most developed country on the map of globe. Under this scheme he always ready to give different scheme to country mates so that they can benefit of them and grow more.

Energy and get have great influence on the economics of a nation as lot of industry depends upon fuel and industry is back bone of any country. So if country has proper fuel resources then growth is sure. By keeping this kind of thinking in mind Prime Minister Narendra Modi launches one of such scheme during his visit to his Lok Sabha constituency Varanasi. 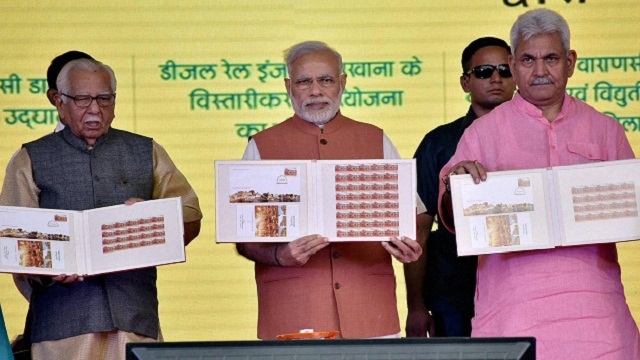 This scheme Urja Ganga was launched by the NDA government lead by Mr. Narendra Modi, along with several other schemes recently. On the occasion of the launch Mr. Modi declared his trust factor over the administration on the completion of this project. Around Rs. 5,000 Crores has been invested for this Urja Ganga project, he added while addressing to the people at the launch function. In this scheme a gas pipeline is put which will give piped cooking fuel to populace of this very oldholy place town as wellgiving to millions of customers in neighboring states.

In addition, in recent times, NDA government shows keen on launching several schemes and yojana for Indian people particularly for the peoples from BPL (Below Poverty Line) families. After announcing about the Urja Project, Mr. Prime Minster laid the foundation stone for the second line rail line electrification process in between Allahabad – Varanasi route along by initiating the process for setting up the unpreserved consignment center at the Rajatalab Railway Station.

He said to the people that govt is trying their best to fulfill the entire basic requirement and for this purpose he gives gifts of these schemes so that all people can take benefits of basic requirement. He said the real plan of government plan is appropriateimplementation and movingpeople’s lives. For this he gives grand of Rs 5,000 crore for the people of Kashi.

In the Urja Ganga a 2540 km long gas pipeline which will guarantee supply of clean and eco  friendly fuel to at least seven main cities – Varanasi, Patna, Jamshedpur, Kolkata, Ranchi, Bhubaneswar and Cuttack .

This is estimated that project will get complete in 2020, after that people can get gas supply at their houses itself. It will surely give lot of benefits and also help renewal of a number of decliningfertilizerindustrialized units. In this scheme not only houses get the piped natural gas but approximate half a million vehicles to switch over to CNG mode so also the problem of fuel which is big in our country these days.During his this visit modi also put a stone for the 120kmlong VaranasiMadhosinghAllahabad railway line that will cost approximate Rs 750.66 crore.

This project is mainly launch to give a major step towards combineddevelopment and expansion of the Eastern region of India. Once this project is completed approximate 20 lakh households will get PNG connections at very reasonable rates and many vehicle convert to CNG mode.

To enhance the life site of his region Prime Minister Narendra Modi said that this project will be completed in the next 2 years and lot of people will get benefits from this scheme. The respective authority has given budget of Rs. 51,000 crore to complete this project. He expect that this plan will e completed in next 2 years and after that people will get gas at their houses and they will get free from many hassle which they face during the filling of cylinder. Also free from risk related to cylinders. The pipeline network will be used to supply clean fuel to the end consumers in the city.

This project will cost total Rs. 51,000 crore and will be total 1,500 km covered long gas pipeline along with gas stations at different locations. People of villages near to the region also get benefited because of this project. And it is assumed that almost all the houses will get benefit from the gas connection as this will be very reasonable to the people.

In Varanasi alone the length of pipeline will be 800 kilometers which will be put under the plan to give benefits to about 50,000 households of Varanasi and nearby region. Approximate 20,000 vehicles for PNG and CNG correspondingly get benefited because of this project and hence reduced the pollution and solve the problem of fuel. Urga Ganga project would also allow the accessibility of approximate 5 Lakh LPG gas cylinders to the rustic population in the coming 5 years. Also constructing new 20 CNG station will be included in this project, owing to this around 2600 villages from more than 20 districts would be benefited on gaining CNG and also LPG gas under this new Urja Ganga Project. The new station will be positioned on suitable places where it doesn’t harm the peoples’ routine life.

Fist face of the project will start in December 2018 and only in Varanasi about 1000 crore will spend on this project. Other then Varanasi other 5 state will also get benefited because of this project. The Urja Ganga project appropriately conveys the payback that people of Varanasi will take pleasure in once the infrastructure of this project is put in place. Varanasi, as a result becomes the first city in the government’s enlargement roadmap of Eastern India. The gas pipeline and supporting transportation will give advantage 36.8 lakh people residing in the city of the temples. Once this project will start after that city of temple will convert in high profile cities as it is thinking

This project is basically launched for the city Varanasi which is also known as city of temples. Varanasi will get the following benefit because of this project

Benefits of the projects

No doubt Prime Minister Narendra Modi launch these project to get benefit in the next election but they also give benefit in growth of country. People should sport to him so that our country will appear on the map of globe and all Indian will get benefitted by basic requirement especially from the rural areas

The launch of the Urja Ganga project would not only ensure the household members health safety by providing clean fuel, but also this project helps to maintain eco-balance by making people to skip woods as their cooking fuel.