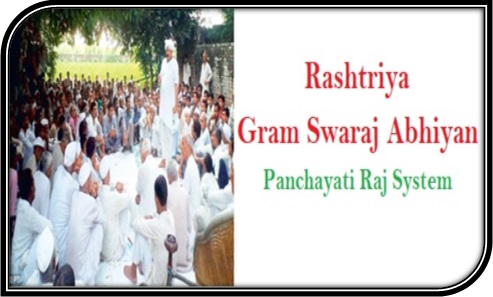 “Assam CM Samagra Gramya Unnayan Yojana has been launched by state with many facilities for betterment of gramin citizen.”

The centre will be the main player here which will assist the states to promote and implement the RSGA so that capacity building of the gram panchayats can be done efficiently. After gram panchayat elections, the elected members are given the responsibility to perform the administrative and governance works at grass root level i.e. the panchayati level.

“Gram Sadak Yojana and Pradhan Mantri Gram Parivahan Yojana have been launched for the better transportation of rural areas.”

“ Pradhan Mantri Awas Gramin Yojana has been started by PM Narendra Modi for providing shelter of villagers in terms of subsidy.”

Development of institutional capability for training

“For developing backward areas of the state, Haryana government launched a scheme as the name of Deenbandhu Gram Udaya Yojana Haryana.”

“For strengthening the condition of electricity in backward areas Deen dayal Upadhyaya Gram Jyoti yojana has been launched by central.”

Why is the Rashtriya Gram Swaraj Abhiyan (RGSA) needed?

The RGSA will empower the panchayat systems in India. Under this scheme, the members of panchayat will be provided skills on decision making, expenditure management, information systems, delivery of services to the people, interacting with common people, etc. Special training for the new entrants of the panchayats, women and members of SC / ST category will be held before they take up the office.  The officials have put the figure that a total of around 2,85,000 Gram Panchayats will be directly benefitted with the RSGA program, throughout the nation.

Earlier scheme was named as RGPSA after the name of former Prime Minister Shree Rajiv Gandhi. The governing authority of the RGSA scheme is the Ministry of Panchayati Raj. The NDA Govt. has decided to reconstruct the scheme and has named it RGSA to strengthen the Panchayati Raj system across the nation. This scheme was first brought up in the year 2006 and implemented in 2007 under the twelfth 5th year plan.

Rashtriya Gram Swaraj Abhiyan is an initiative by the central government of India. It will start from 14th April 2018 and will continue till 5th May 2018. According to the initiative, all the ministers in India from several states will go and live for a night in villages that contains Dalits, Scheduled Caste, Scheduled Tribe and economically backward classes. The ministers will have to make them understand various development schemes like Ujjwala Scheme, Jan Dhan Yojana, Awas Yojana and many others.

Indian Prime Minister made an announcement on the 6th of July, 2018 that around 5 lakh families in West Bengal will receive free LPG connections. As of now, the facility will be available in some rural areas only. It will be done as per the guidelines of Gram Swaraj Abhiyan. It aims at offering smokeless cooking facilities to rural women. The free connections will be offered by IOCL. Central authority desires to complete the process before 15th August, 2018. The selection of 7,364 rural areas is complete. With this scheme, IOCL will start its journey of reaching 98% houses in West Bengal. Work has started since 14 April, 2018 to finish this task with set deadline.