With an aim to ease the process of revision for the pensioners in the state, the Odisha State Government has announced the introduction of advanced web portal ARPANA (Apply for Revision of Pension using Aadhar Number Authentication). The new service has been launched by the state government for ensuring that the services can be accessed by all retiring pensioners within the state. 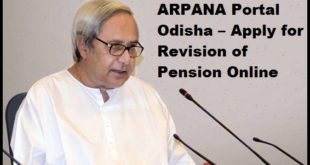 Once the web portal services has been launched fully by the state government, it aims that the pensioners within the state will be able to check with the online status of their pension revisions along with the status of pensions for their family members.