The Cabinet Ministry has taken another step towards the employment generation last Tuesday. Prime Minister Shree Narendra Modi has approved the scheme for the young generation of the nation to develop their training and skill to acquire more jobs in the future. The National Apprenticeship Promotion Scheme has launched to support over 50 lakh young people to develop their skill and to train them for their future job profiles. The ministry has allocated Rs. 10, 000 Cr for this project. The scheme on the other will commercially enhance the training centres that are currently involved in professional training and skill development activities across the country.

What is National Apprenticeship Promotion Scheme?

By Apprentice training we mean the skill development training that workers need apart from any bookish knowledge. From earlier times India stands out to be one such nation that has less number of skilled work forces. Apprenticeship Promotion Scheme will allow the young work force to acquire more skill by getting professional training classes and attending workshops. 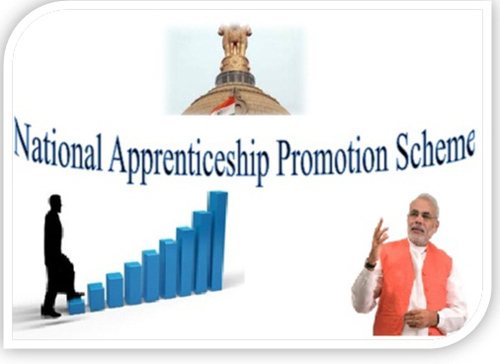 This scheme has launched to promote the skill development training that is much needed in the country like India. Under National Apprenticeship Promotion Scheme over 5 million students will get such training in various training centres. Currently the number of students who are getting such training is 2, 30,000. The government of India is planning to increase the figure to 5 million by the end of the year 2019-20.

Purpose of the Scheme

As mentioned that in India there are very less workforce that are properly skilled in any field. However the education system allows them to acquire high degrees but unfortunately due to lack of proper skill they fail to compete in global market. The sole purpose of the scheme is to provide adequate and necessary skill development training to millions of young people across the country.

Also the stakeholders of the training centres will also get benefitted as the government will be funding 25% of the total training cost. As a whole the purpose of the scheme is to provide skill development training to the young generation and providing financial benefits to the training centres.

Who and How Implemented the Scheme

The National Apprenticeship Promotion Scheme will be implemented by the Director General of Training (DGT). The scheme will be supervised by the Union Ministry of Skill Development and Entrepreneurship. By the end of the year 2019-20 the scheme will be able to cover 5 million apprentices across the country.

The government of India will be allocating Rs. 10, 000 Cr for the scheme. They will bear the 50% of the total cost of training on the one side and on the other they will be providing 25% of the stipend given to the apprentice by the company. The government as a whole will contribute in not only the training but also will provide commercial benefits to the companies.

The scheme has launched on 5th July 2016. Ravi Shankar Prasad has launched the scheme under the supervision of the Cabinet Ministry in New Delhi.

Any candidate who is interested can also get registered to the official scheme by visiting the link at http://www.apprenticeship.gov.in/Pages/Apprenticeship/EstablishmentSearch.aspx?IsApply=1.

You will be redirected towards the online registration form. In order to apply applicants will also have to provide a copy of their Bank account details and Aadhar cards.