How to Exchange and Deposit Old 500 and 1000 Rupee Notes in bank and Post Office?

In an unprecedented and historic move, Prime Minister Narendra Modi announced that Rs. 500 and Rs. 1000 notes will be banned in India. This – first time on TV announcement – came from PM Modi after Pakistan violated ceasefire agreements in Jammu and Kashmir. After the recent Uri Attacks by Pakistani terrorists and India’s fitting reply in form of surgical strikes across border, tensions between the two nations escalated. Pakistan started to violate cease fire agreements at several points along Jammu and Kashmir borders.

After a meeting with heads of armed forces of India, PM Narendra Modi addressed the nation on November 8, 2016. This address was televised where PM Modi clearly stated that counterfeit currency notes are not only affecting India’s economy but are also playing instrumental role in promoting and harboring cross-border terrorism.

In order to deal with the problem of black money and also to give a blow to terrorism, this historic move was necessary. He asked the Indian citizens to help by happily accepting this tough decision, which is going to cause some inconvenience for at least 2 days.

What did PM Modi announce?

PM Modi announced that starting midnight of November 8, 2016, the currency notes of denominations Rs. 500 and Rs. 1000 will cease to be a legal tender. They will be reduced to status of useless paper pieces and will not be accepted in any transaction across the nation. Modi stated that this move is a part of fight against black money and terrorism – the two pillars of destruction that have plagued the Indian economy for a very long time.

Process to exchange and deposit Rs. 500 and Rs. 1000 notes in banks and Post Office.

In case of post office, all head post offices as well as sub post offices will allow such exchanges. One thing you need to know about the exchange is that there is limit set for this exchange. One person cannot exchange more than Rs. 4,500 . But you can deposit any amount of rs in Banks and Post Office.

In both Post office and Banks you will have to fill the Exchange or Deposit of old notes form and an ID Proff. 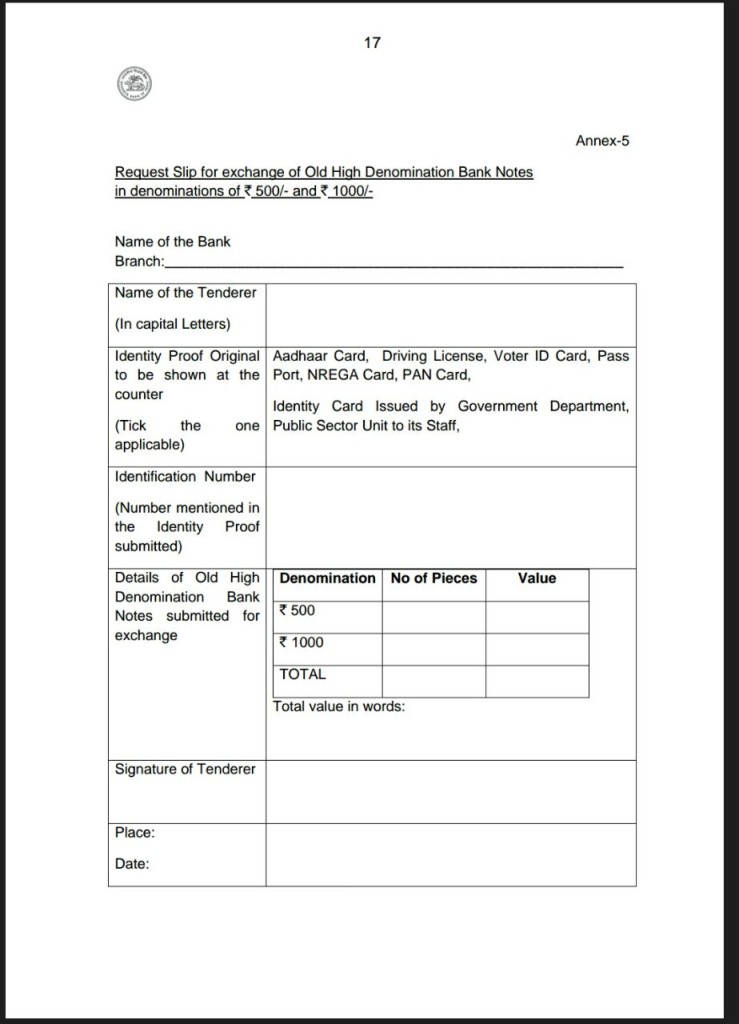 So, if you are in possession of these Rs. 500 and Rs. 1000 currency notes, have them exchanged or deposited right away else, you may have to repent.