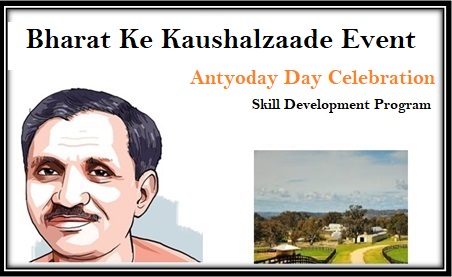 The government of India has declared Antyodaya Diwas on 25th September to celebrate the birthday of late Shree Deen Dayal Upadhyay. He was a veteran politician. On this day the respective state governments will arrange various activities and event throughout the country by establishing camps and such.

Blood donation camps, seminars, symposia and much more activities will be held on this occasion. The day was officially celebrated since year 2015. This is the 3rd year of Antyodaya Diwas. As the day is celebrated on the occasion of Pandit Deen Dayal’s birthday, events associated with youth talent and skills are being arranged in various places. This year just before the Antyodaya Diwas has come, the government of India has celebrated the skill and capabilities of the youth of the nation, especially from rural areas in Bharat Ke Kaushalzaade.

The occasion has targeted those who have achieved a lot through these programs under rural employment schemes. They are being named as the stars by the authority. Also in this event RSETI has gotten a new logo that was launched by the government. The logo depicts the future stars that is the youth achievers under the institute and DDUGKY scheme.