With the increased number of population, in every census there comes the real picture of the country’s growth. The most remarkable thing which have been  noticed in the existing scenario is that even if the country has grown multifold in relevance to the past years there still exists a scope of big correction in the ratio of number of girls standing strong in the number of boys.

After observing various campaign drives from the past government the Modi Government is heading strong towards the new initiative to bring in more awareness among the Indian citizens to save and educate their girl child. The objective behind the campaign has strongly illustrated points towards the welfare of Indian girls to achieve more with this initiative.

The Government has paid keen interest in knowing the facts about the current ratio of girls : boys, women : men, and has figured it out that though we claim that India has become strong, but does Indians have become strong. The strength of a nation depends upon the strength of its natives. As the native works for his growth, the nation grows automatically with that effort. Focusing upon the overall development of natives and nation the Prime Minister Mr. Narendra Modi has come up with the new Campaign named as “Beti Bachao, Beti Padhao” with the aim to make the nation more strong with the strength of its Women. 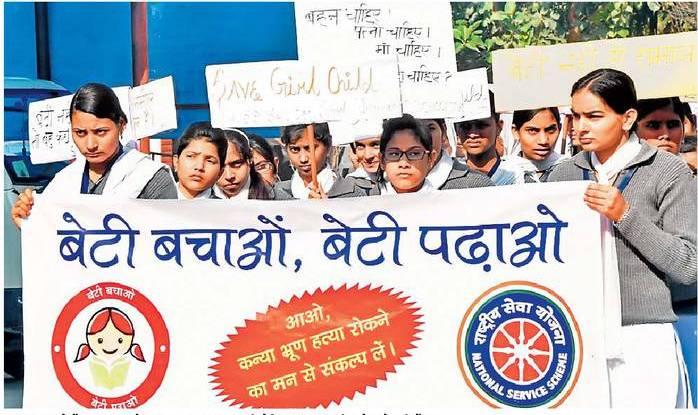 Indians worship many Goddess in the name of faith on religion, but a large group of girls/ women faces many challenges in their day to day due to being uneducated, and no financial stability or other growth as they could not study at the right age. This is a grand initiative taken for core women empowerment to fix the lacking number of girl child ratio also to educate and provide them the opportunities to explore great heights for a better tomorrow.

The factual data says that the consistently declining trend of Child Sex Ratio (CSR), as per the noted records has shown a tremendous down trend in every Census record across the nation which illustrates the real image of the number of girls in India on an average of per 1000 boys have been 945 in 1991 to 927 in 2001 and later 918 in the year 2011 which is highly alarming condition.

Child Sex Ratio reflects the most appropriate number of both the kind of discrimination; either pre-birth discrimination appeared through the biasness reflected while choosing to continue only after identifying the gender of the unborn and post birth discrimination against girls which is noticeably higher. With the misuse of the diagnostic tools easily available and affordable the identification of the gender of unborn has been the most critical factor for the increase in Sex Selective Elimination of girl child which was really a factor needed to look after at high priority to bring some changes in the prevailing scenario.

With the Initiative of “Beti Bachao, Beti Padhao” campaign the most highlighting factor was to make the nation aware of the current scenario of girl child present in India and the status of their education which may not only empower them if they continue their studies, but also be helpful in making them firm to tackle the difficulties of life which after being educated will be solved to some extent as per the eligibility they can outstand comparatively brighter and can take up the responsibility of family while spreading the wisdom and knowledge.

While noticing all these factors highly constructive coordinated and convergent efforts were needed to ensure the safe survival, highly protected environment for empowering the girl child to have a bright future, aiming to bring a great change with the initiative of “Beti Bachao Beti Padhao” drive. With the objective to make the nation more learned, educated and strong in the long run of life.

The Project has now begun to create awareness for the vision of the campaign and with the initial investment of 100 Crore the Indian Government has started generating awareness towards improving the efficiency of welfare services with the most effective modes meant purposefully for the development of women. On International Day of Girl Child Indian Prime Minister Narendra Modi announced to work dynamically for eradicating female foeticide numbers by shutting all doors of gender identification centers.

After noticing the drastic drop of the ratio of girls on boys which is 918:1000, the Government in coordination with the Ministry of Home Affairs also decided to spend a grand sum of Rs 150 crore on the scheme to increase the safety of women in large cities. While addressing a public meet at Panipat, PM Narendra Modi has highlighted the keynote for not sticking with 18th century mindset and move forward while encouraging the girl child birth and education. He also mentioned about the critical crisis which the nation can go through if the female foeticide discrimination is not stopped immediately & effectively and described the indulgent in the female foeticide to be suffering from mental illness.

Recently, Women and Child Development Ministry released an official announcement that highlighted how much the central government has spent on the implementation of Beti Bachao Beti Padhao Yojana. The scheme was implemented 3 years ago and within this period, Rs. 282 crore has been spent on it. The amount was Rs. 59.37 crore in 2015 – 2016 but it came down to Rs. 28.65 crore in 2016 – 2017. However, union government upped its activities and spent Rs. 169.10 crore in 2017 – 2018 and Rs. 25.40 crore till July 2018 (for 2018 – 2019 financial year.) This scheme has helped in improving the overall sex ration in 104 districts. The ministry is hopeful that it will only go up in the future.