The Antyodaya Anna Yojana is not a new initiative that has been taken by the present government. The first announcement of a scheme like this was done in 2000. Under the scheme, the central government was going to assist the poor and the needy with ration at very low prices. The scheme was mainly for the people falling under the BPL category.

According to the latest announcements made by the Ministry of Food, all the families falling in the AAY category will be provided with sugar at prices that are very low as compared to market rate. The government outlets will charge the AAY families only Rs. 18. 50 for every kilogram of sugar. It will put fewer burdens on the poor families by availing the benefits of the scheme. 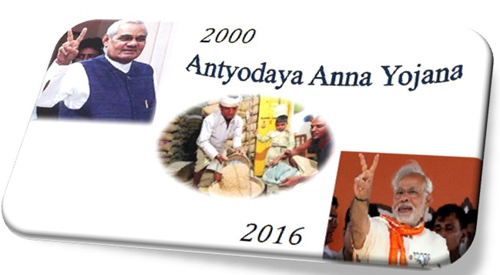 For understanding the scheme in a better way, one needs to take a look at the salient features of the AAY program:

The scheme is not for providing food in the stomach of the poor, the program has been especially designed for the poorest of the poor categories. The following are the eligibility criteria for being a part of the scheme:

Documents required for the Yojana

The AAY scheme is the brain child of the Central Government. Thus, it is the duty of the central government to bear the burden of the whopping cost of providing the food grains at very low prices. As per the reports, around 90% of all the cost of providing the food grains is provided by the Central Government and the rest is tolerated by the state authorities. With the new revision of the scheme, the exchequer will rise by 1.39 lakh crores. When considering the expense on a yearly basis, the total amounts to 2315 crore.

According to the reports that have been published by the central government so far, the AAY scheme has been implemented and running successfully in the states of Himachal Pradesh, Madhya Pradesh, Rajasthan, Andhra Pradesh, Chhattisgarh, Uttar Pradesh and Union Territories of Dadra & Nagar Haveli.

The main objective of the scheme is to provide the poor and the needy with basic ration. The scheme will assist the government in getting an upper hand on the poverty in the nation. As the central government was providing food grains at very low costs, all the BPL group people will be benefited under the program.

Kerala Government has initiated a scheme to deliver food items. The Onam Kits is set to offer food items to 5.95 lakh families. The new kit was initially decided in a cabinet meeting headed by the CM, Pinarayi Vijayan. The state government eventually has started implementing free distribution of the Onam food kits at Rs. 6.91 crore outlays, which will get distributed free. The main objective of the Onam kits is to deliver food items to 5.95 lakh families and enjoy the Onam festival which brings rejoice and prosper in the life of the people in the state. Through this scheme, the Government aims at delivering the utmost enjoyment with the inclusion of vegetarian feast on the Thiruvonam, the second day of Onam. The festival will be held on 24 August this year.