However, many construction companies attain authorization certificates by highlighting flawed details. They may submit documents stating that the building will be used for residential purposes, while in reality; they are planning to sell the space for commercial usage. Such discrepancies, or failure to follow the construction guidelines, set by the government, make the construction unauthorized. The state government has the power to charge a penalty, or demolish the structure.

For this, the Karnataka state government has passed the Akrama Sakrama Scheme in 2013. The schemes became operational from 2015. The guidelines were strict, and the construction companies were facing various issues in continuing their business. Thus, the real estate development companies filed a complaint in the High Court in Karnataka, and a stay order was issued by the court. 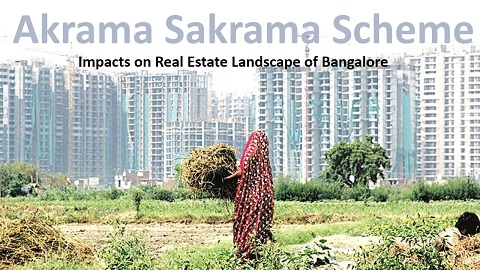 Revenue generating potential of the scheme

The Akrama Sakrama Scheme was developed and implemented by the Urban Development Department. The Chief Minister of Karnataka B.S. Yediyurappa opined that the implementation of this scheme will pave the path for increased revenue generation. In a recent report, the Chief Minister opined that the Urban Development Department has estimated that the implementation of this scheme will pool in around Rs. 50, 000 crore in the state coffers. The amount can be utilized for the development and welfare of the common people, during the Coronavirus pandemic.

Estimated illegal properties in the state

Internal corruption in the property registration department is the primary cause of issuance of fraudulent certificates. A report, published by the local authority shed light on the fact that there are as many as 2.93 lakh illegal structures in Bengaluru. The number rises to 35 lakhs, when you consider the entire state. The Chief Minister said that the Urban Development Department has made the necessary changes in the scheme guidelines. It will enable the government to safeguard the interest of the poor people. The state government is hopeful that the High Count will pass the scheme, after assessing the new guidelines.

It has been noted by the state government that the owners of illegal buildings, which are located outside the Bengaluru area, are charged double tax amounts. The construction companies will get respite from this financial oppression. The implementation of the scheme will enable the state government to charge a uniform penalty of 6% on the total market evaluation of the building that has violated 25% or fewer regulations. In case the percentage of construction violations is more than 25% but less than 50%, the state government can charge a penalty that is 25% of the current value of the property. If the evaluation highlights that more than 50% of the guidelines have been violated, then the structure will be broken down immediately.

If the construction company pays the penalty, and make the necessary changes in the building, then the Karnataka Urban Development Department will issue a certificate that authorized the structure. Otherwise, the state government can take stringent action against the contractor of the real estate development organization. In case of rampant violation of construction and state government guidelines, the Municipal officers can sanction the demolition permission.

The Chief Minister has also mentioned that the high prices of the flats hinder the growth of the real estate sector. It also makes it impossible for the house hunters, which fall in the poor and middle income groups to invest in reasonably priced residential units. By fixing the regulations under the Akrama Sakrama Scheme, the Karnata government will be able to brind down the cost of the residential and commercial properties. Additionally, the new guidelines of the project have been developed to safeguard the interests of common people.

Why interested house hunters fail to find a suitable home?

It is impossible for all probable house hunters to invest in high-end residential units. People, with limited budget, look for flats in the suburban areas. The number of unauthorized properties is more in these locations. When the house hunters learn that the building is unauthorized, they step back from investing in such properties. A survey, done in the real estate sector highlights that there are as many as 35 lakh units, which are unsold due to this issue.

What are the registration charges?

In the urban areas, the applicant or the contactor must pay anything between Rs. 2500 to Rs. 5000 for submitting the registration. In the rural areas, the same charge is Rs. 3000 for those individuals, who hail from the general category. If the applicant belongs to ST or SC category, then he/she must pay Rs. 1500.

What is the regularization fee for the property?

How to get the application form?

The new guidelines have some alterations in the eligibility and application process. If the court gives its consent to this scheme, then the new rules and regulations will be uploaded on the official portal.