The state government of Haryana has understood that for the overall development of the state, the government needs to put more stress on the progress of the villages. Thus, the state government had decided that every sitting MLA in the state will have to adopt three different villages and work towards the overall expansion of the rural area. The scheme was propounded under the BJP government and the name of the scheme is Vidhayak Aadarsh Gram Yojana.

“Saansad Adarsh Gram Yojana has been launched by central for developing rural areas. Mr. Narendra Modi government has launched many schemes for developing the status of our country.you can go here for PM Schemes List.” 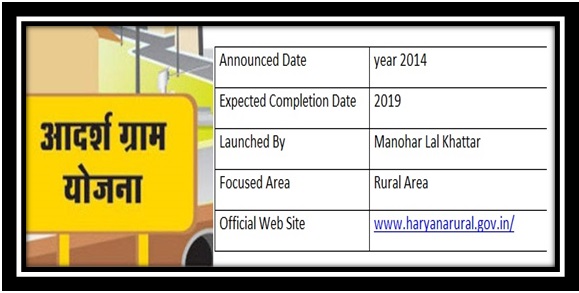 “Haryana government has launched many schemes for betterment of the state citizen.

It has already been mentioned that the steps must be taken for the expansion of villages and developing the overall infrastructure of the rural areas. The main aim of the scheme is to bring about an overall development of the villages. It will not only increase the economic base of the rural area but will also establish facilities which are available in the cities. Thus, people will not have any problem in settling down in the villages.

“Transportation problem is the biggest problem in rural areas in our country. For improving the problem central also working by the scheme of Pradhan Mantri Gram Parivahan Yojana . In the same manner Pradhan Mantri Gram Sadak Yojana also has been announced by central.”

The implementation of the scheme is not only for addressing the development of the villages, under the watchful eyes of the MLAs, but it will also assist in highlighting and upholding certain aspects:

“Rashtriya Gram Swaraj Abhiyan has been supported by state and central for empowering the Panchayat system. Deenbandhu gram uday yojana has been started for improving infrastructure  of the state villages.”

To understand the program better, you will have to take a look at the salient features of the scheme:

“CM samagra gramya unnayan yojana Assam has been launched for improving villagers of the state.Deen dayal upadhyay gram jyoti yojana has been started by the government for providing proper electricity in village areas.”

There are a total of 58 constituencies in the state of Haryana. There are approximately 6,841 villages in the state and all these villages were to be selected by the MLAs. Each MLA was to select three separate villages. But it seems that the task of implementing the scheme has met with some road blocks. Many of the MLAs are still to choose their first adopted village. They complain that the conditions and funding pattern is confusing. For now, the villages that have been adopted have been published by the state government. You can gather information about it by clicking on the link

“CM of Odisha, Mr. Naveen Patnaik has also launched a scheme as the name of Biju Gaon Gadi Yojana for the condition of transportation in rural areas.”

If you are interested in gathering details about the scheme Vidhayak Aadarsh Gram Yojana, then you need to check out the official website of the program. The link of the authorized web page is www.haryanarural.gov.in/.

Prosperity and the development of the villages of Haryana rest on the promptness of the MLAs. The more time the MLAs take in selecting the villages and embarking on the actual task of implementing developmental activates, the more delayed will be the success of the program.