To spread awareness about cleanliness the central government of India has started Swachh Survekshan 2018 for the citizens of the nation. Anyone, living in this country can take part in this initiative to provide a clean city. Under this initiative all the cities of the nation can participate and according to their performances they will be ranked. 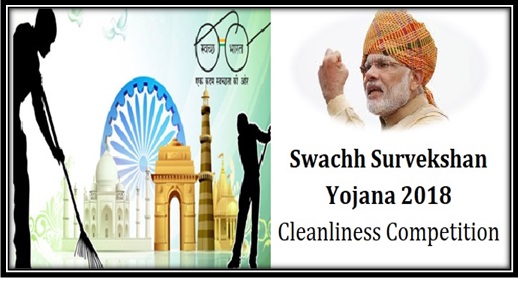 As said that there will be competition between the cities of the nation, there will be point’s distribution as well. Cities will be given points on the basis of three sections, general observation by the authority, feedback from the citizens and Efforts by the local municipality.

The distribution of the points is 30% (general observation), 35% (feedback) and 35% (efforts by municipality). On the basis of above mentioned 6 parameters these three sections will be counted and the points will be given to each city. Depending on these points cities will be ranked.

Swacch Survekshan is said to be the largest cleanliness initiative in the world. The central government has requested all the inhabitants from these 4041 cities to join the move and make it much bigger. Swachh Bharat Abhiyan is now at its second phase where the scheme has been shifted to sustainability from the process. Within couple of years (till 2nd October 2019) the central government will make it the biggest movement ever. The official website for the initiative is https://www.swachhsurvekshan2018.org/.

After SBM, central government took another initiative to ensure better cleanliness in rural areas. The name of this scheme is Swachh Survekshan Grameen Scheme or SSG. In the first phase, it has been implemented in Uttar Pradesh, Maharashtra and Jharkhand. If the scheme offers satisfactory results in these areas, it will be implemented in other areas as well. It enhances sanitation and cleanliness in rural areas. During this year’s 2nd October celebrations, such districts and states will receive special rewards from central Drinking Water and Sanitation Ministry. It is the responsibility of state authorities to popularize the scheme amount people in rural areas.