Swachh Vidyalaya Puraskar is an integral part of Swachh Bharat Swachh Vidyalaya, initiative started by the Modi government in the year 2014. This year the SVP has completed one year and for the next financial year registration has been started. Schools from across the nation can participate in this SVP initiative. 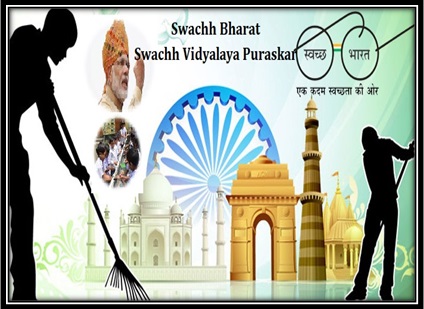 How would school be awarded :

This year the initiative has extended to the private schools as well unlike last year. In the year 2017-18, the number of participants is huge; it reached 2, 68, 402 schools. Extending the initiative to the private schools has made it bigger than previous year. All the students from these schools have participated in various activities related to Clean India. They are named ‘cleanliness ambassadors’ by the authority.

This year the central government has included private schools and aided schools along with government schools in urban and rural areas.

Only online registration is available for the Puraskar. All the schools have to register their names under the official web portal of Swachh Vidyalaya supervised by the Ministry of Human Resource Development. There are few easy steps through which one can register the name of their school in the web portal http://www.swachhvidyalaya.com/.

A sample registration form is available in PDF format in this following link http://swachhvidyalaya.com/SVP%202017-18_Survey_format.pdf. For more details one can go through the page.

In the registration form all schools have to enter the U-DISE Code. This is a mandatory field. If any school does not have this code then they can download DCF or Date Capture Format from the link http://www.dise.in/Downloads/UDISE_DCF2015-16.pdf and submit this to the district / block / state offices. Further the officials will generate the UDISE codes for the schools. Thereafter they can enter the code in the registration form.

The registration has been started from 1st of September  and will last for 15 Nov. Within this span of time all the schools have to register under the portal by filling up the registration form.

There are three categories of sections of awards. The sections are divided according to the following levels:

Guidelines Of the Scheme

There are few guidelines of the Puraskar. To participate in this initiative all the schools have to follow these guidelines. The detail guidelines are mentioned in the following link.

For the Android Smartphone users, it is easier to register under this initiative. Mobile app for the Puraskar is available in Android platform. The users can download it from the Google Play Store. Also people can give a missed call to the number 07097298093 to get a link to download the application on their phone.

Every year many a students, mostly girl students stop going to school after a point of time due to low quality of sanitization and cleanliness in the schools. Not only in rural but in urban areas as well they are facing the same problem in schools. To get rid of this the initiative has been started. The authority is expecting this initiative to become bigger in future as more people will join hands to have better place for the students in India.

The central government has propagated the idea of maintaining high levels of cleanliness and hygiene in government as well as private schools. To encourage more participation and better outcome, it has announced special prizes for top three schools. The short listing is complete and three government schools from Haryana have been selected for the state –level awards. The school authorities will receive the reward on the 18th September, 2018 in New Delhi.

The central government has announced that it will start next phase registration soon. For that, interested schools have to log on http://mhrd.gov.in. Here, all important details and guidelines have been highlighted. The schools can also submit their applications by downloading the Swachh Vidyalaya Puraskar smart phone application.