Stand up India Scheme, targeted towards the uplift of SCs, STs and women entrepreneurs, will be officially launched on this coming Tuesday of  April, 2016, by the Prime Minister Narendra Modi at Sector 62, NOIDA. The launch of Stand up India scheme would be elegant which includes ministers like Finance, Culture and Tourism along with the Governor UP. 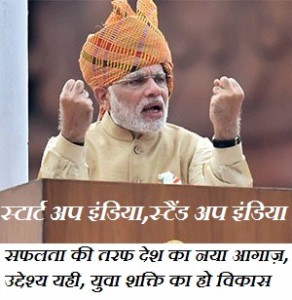 Stand Up India – A Brief View

The Stand up India scheme is primarily aimed at promoting the entrepreneurship among the SCs, STs and women by providing finances to them from Rs. 10 Lakhs to Rs. 100 Lakhs, in their establishing new businesses. The scheme is supposed to benefit the maximum number of people who are entrepreneurs of SCs and STs.

Unlike other schemes to boost Indian economy status, this Prime Minister’s “Stand up India” scheme has a strong motive behind as to make India as a developed nation by 2022. As an initial step Indian government started this wonder scheme with help several private bodies including internet giant GOOGLE and Life Insurance Corporation of India which will play a huge role on developing newly Start Up enterprises under this scheme.

How to Apply/enroll for Stand Up India Scheme

All the entrepreneurs who are either women or members of the Scheduled Caste (SC) and Scheduled tribes community who want to enroll themselves in the Stand Up India Scheme will have to wait for its official launch. It is expected to be launched in late April or early May.

Stand Up India, an initiative to encourage new business ideas, has a number of eligibility criteria that one must follow before applying for the scheme.

The key eligibility criteria of the scheme are

Main things which one needs to know about Start up India Stand up India Loan Scheme:

The main intent of the scheme is to offer the strategic advantage gained with institutional credit structure to these underserved sections of the society in SC, ST and women borrowers. The proposed scheme is also developed to gain synergies with the other such schemes in-action of different departments.

The scheme also establishes a charging and service station for facilitating the growth and emergence of small and micro enterprises and also in creating many opportunities for the entrepreneurs.

The Stand up India scheme is about to launch under the root of Pradhan Mantri Mudra Yojana scheme. The important factor which everyone must be aware of this scheme is “The entire scheme will be act as a hub, where all process will be carried under single point of contact. Owning to this knowledge sharing and availing proper assistance from the relevant experts would be so easy apart from receiving funds”

The young entrepreneurs need not to be rushing anywhere for registering under this Start up Stand up India scheme, the mobile application which will be launch by our Prime Minister in next few days will be open to registration for all. Also the biggest benefit for the entrepreneurs and webpreneurs under this scheme is their businesses earnings are free from TAX for the initial period of 3 years.

SBI will again be the biggest Partner affiliate for this ambitious Modi scheme.  SBi have not rolled out any specific application for for this particular scheme. but it seems Mudra Loan for could well be used for the same. Interest rate of Stand up india scheme in sbi would be around 1% per month.

Though, Start up Stand up India scheme believed as strong factor for making India as a developed in near future. There are few things which raise worries like whether it’s possible to get such required skill set among the fresher’s? Since the nation’s educational quality was always comes under scanner every now and then. Also the campaign “Skill India” is under progress all over the nation in order to improve skills among Indian youths. So it will hard to match the required organizational skills among the fresher graduates, as per the view of some national experts.

Start up India Hub was recently launched for the emerging entrepreneurs in India. It has been seen that a many start ups have gone under the vain even before starting up their journey. The number of failure of start ups is much bigger than the number of successful names in India. Surveys depict that the reason behind it is financial loss, but in the countries like India, there are many issues related to tax and other technical parts that lead to failure in start ups. Looking at this situation, the government of India has launched this start up India Hub in April 2016 to support the emerging entrepreneurs in the nation. It’s been quite a long time that the Hub is launched and now it is time to survey the response that the authorities have received in last 3-4 months.

Start up India Hub aimed to provide support to the start ups that are facing several issues. The Hub will also help to get the certificate from DIPP to be recognised as the start up in India. According to the plan of the HUB, the authority will take the applicants’ complaints and requests regarding start up issues like tax benefits, financial eligibility, certification eligibility, incubation information and much more and will lead to solve the problems witnessed by the start ups today. Also the Hub has requested large companies, state governments, experts and start up scrutinisers to join their hands and become their partners to take the initiative further.

As per the authority the plan has successfully implemented in only 3 months of time. The Hub was launched three modes of communication through which applicants can place their queries regarding their problems. The three ways are direct phone call, via social media and via e-mail. The sources said, within these three months more than 700 applicants have placed their queries under this Hub regarding various issues. Most of them are for the certification process. As of now on an average nearly 200 queries are being recorded per day.

Some of the measurements have been taken to take the initiative forward. These measures were taken in favour of the start ups registered under the stand up India scheme.

Since the start up India Hub portal has been launched, total 728 queries have been recorded under the Hub. As per the survey conducted on 18th July 2016, the number of applicants that have already received the certificates from DIPP and recognised as start up is 180. The others didn’t fulfil the criteria and so they get the hands on experts’ assistant to take things further.

On the other total of 16 start ups have incorporated that are exempted from income tax. Out of these 16 start ups only 3 are being considered for the inter-ministerial board certification from DIPP. Though 2 of these 3 have been cancelled due to improper documentation but remaining one has got the certification properly.

Till now the response seems to be quite positive. As we witness frequently emerging start ups across the country, this start up India Hub has made a lot of dreams true by providing them proper and expert assistant for their start up business.

Start up India Hub – What to expect in future

The Commerce & Industry Ministry has recently organized the Startup India Yatra, which eventually went official on 30th July. The first boot camp was held at Raipur, and the next camp got organized at Bilaspur. The Government Engineering College was chosen as the venue of the Yatra scheme. Further camps will also get organized in other ploy-technique as well as engineering colleges in the recent future. Some of the states where this scheme is set to get introduced are Surguja, Korba, Koria, Raigarh, Rajnandgaon, Jashpur, Balodabazar, Balod, Kondagaon, Durg, Jagdalpur, Dhamtari, Kanker, and Dantewada.