Sauchalay Nirman is yet another initiative by the Bihar government, after the central, to provide healthy sanitation to all the households in the state. The main concentration of the scheme is on the people from rural and remote rural area where more than 75% households still don’t have proper toilet system. Sauchalay nirman, ghar ka samman is one such initiative taken by Nitish Kumar, the CM of Bihar to provide healthier and more hygienic private toilets to the people living in slums and rural areas across the state.

In the month of September 2016 the scheme was launched in an event. It is said to be one of the 7 resolves that will be taken by the state government for the growth and development of the state. Along with this scheme the state government has also launched another scheme namely Har Ghar Nal Ka Jal. 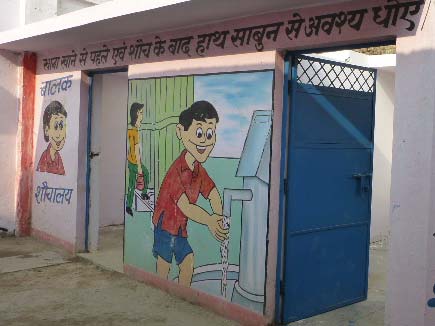 This one is another scheme under the 7 resolves that launched with Sauchalay Nirman. Under this scheme the state government has promised to provide free drinking water to all the households who belong to below the poverty line or living in slums area where getting pure drinking water is challenging. Pure drinking water will be provided through taps.

How the scheme will work

The Sauchalay Nirman scheme is said to be the extension of the Swacch Bharat Abhiyaan. Before the sauchalay nirman scheme’s official launch, already 1 million toilets are being built by the central government under SBA. Though it is the extension of SBA however this scheme only concentrates on the sanitization in under developed areas not the other cleanliness campaign.

Sauchalay Nirman scheme is launched and started working under the supervision of the swacch bharat abhiyaan. The rules and regulations are almost same for the two schemes. The 7 resolves or 7 reforms schemes under state government of Bihar are also parts of Swacch Bhrata Campaign. Under SBA Rs. 4000/- has been given to the families to build toilets.

The Modi government had declared about the Smart City a long time back. Under this title the central government will provide better sanitization, pure drinking water, clean roads, better amenities, developed communications, better transportation and roads and much more to the under developed areas of every state including Bihar and other less developed states.

Sauchalay Nirman scheme and Har Ghar Nal Ka Jal Scheme both of them are parts of this smart city plan. With these schemes Bihar government will provide better sanitization and pure drinking water to all the households across the state. Smart city campaign is funded by the central government. Also, if needed state government can contribute in funding too.

Sauchalay Nirman Scheme, as mentioned is an extension of Swacch Bharat campaign and also is a part of Smart City Plan. So the funding is partly done by the central government and partly by the state government.

In a recent report published by leading news paper in India that Nitish Kumar, the honourable Chief Minister, Bihar has said that he is not much happy with the fund released by the central government for the development of Smart City. According to the report central government has released Rs. 500 Cr for the next five years for the development of smart city and hence the Sauchalay Nirman Scheme. The Bihar government has declared that this much money will not help as the requirement is much bigger.

As said earlier in this article that the Bihar government has given Rs. 12, 000/- per household for the building of private toilets whereas the central has given only Rs. 4000/- for the same per household. After the official launch of the scheme the DM has released 2 Cr. 50 Lac rupees within 15 days for the scheme.

It is a big brand name that is involved in this scheme. Vidya Balan, one of the leading names in Hindi Film Industry is a brand ambassador for the scheme. Most of us have seen her on TV elaborating why people need proper sanitization and how hygiene is very important. The 1 minute ad films were shot to spread the awareness about the importance of the scheme. In one of the ad films it can be seen that how a daughter-in-law has returned back from her in-laws house because there is no sign of private toilets.

The scheme, before launching officially, was already promoted highly because of these ad films which were created to promote Swacch Bharat Campaign mostly. Currently a lot of states have taken this initiative as well and providing hygienic sanitization to the inhabitants of the state.

Some Details about the scheme