It is a flagship scheme of Govt. of India under the Ministry of Health, was launched in Feb, 2013, which is aimed to control the health related issues of the children and for detection and cure of diseases. The age group of children for which the RBSK scheme is applicable is 0 – 18 years. This means this scheme is dedicated for the overall health development, reducing birth defects and management of diseases for children, right from their birth till they attain the age of 18 years. The main motto of implementing the RBSK scheme was to control the high mortality rate of children, specially the new born, in the country. 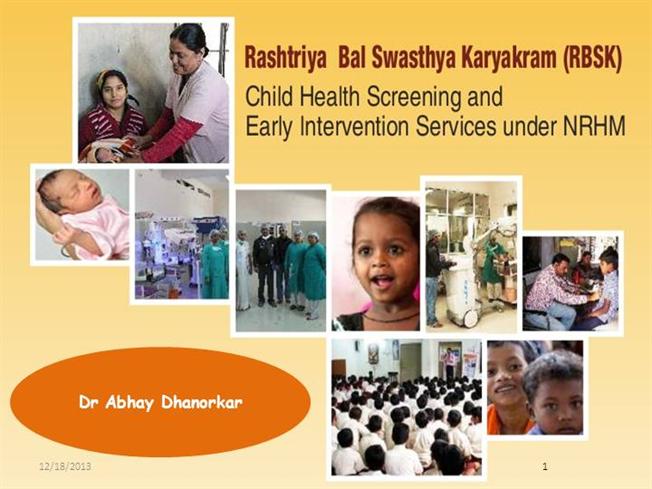 The RBSK mission works on 4Ds of implementation. The first D stands for the defects during birth of the children. At the time of birth, there are several medical complications involved for the baby. These medical complications may be the result of genetic disorders or other reasons. The second D stands for the deficiencies. A major portion of children face the problem of nutritional deficiency, right from their birth. These leads to several diseases among children, which is the 3rd D. Some of these diseases are common but some are very dangerous and pose threat to the lives of the infants. The last D is for the development delays, which includes disabilities caused at the later stage of life.

Health Conditions to be handled under Rashtriya Bal Swasthya Karyakram

Below are the data of the health conditions and diseases which will be managed under this scheme:

Target group of children for the Rashtriya Bal Swasthya Karyakram

There are three categories in which the beneficiaries or the target group under the RBSK scheme are divided. The 1st category is for the new born babies of the age group below 6 weeks, who are born in public health centres. There are approximately 2 crore such children in this category. The second category is for children, with an estimated number of 8 crore, who study in pre – schools located in the villages and the city slums and are in the age group of 6 weeks – 6 years. The last category of children is those who study in Govt. schools or Govt. aided schools between 1st standard to 12th standard. A total number of 17 crore such children are identified and the age group of this category is 6 – 18 years.

Zero cost treatment and medical facilities for all

The govt. has decided to minimize the number of infants die each and every year due to health issues. Some issues are permanent, while a major portion of deaths happen due to lack of medical infrastructure and accessibility to medical facilities. Many new born babies suffer right from birth while other catch up several diseases later. Some also suffer from developmental disabilities. So to improve this condition of children, especially in the rural and backward areas, the Govt. has launched the RBSK scheme which will provide free treatment and other medical facilities to children up to the age of 18 years. The families will get zero cost medical treatment of their children right from birth.

Some important data regarding the health problems of children in India

As per data of the Ministry of Health, Govt. of India, there is a major problem of birth defects among the children. Some problems are genetic but some happen due to lack of adequate infrastructure in many public health centres. Around 6 – 7 babies out of 100 new born babies have defects during birth. This means, a total of 1.7 million new born babies suffer from birth defects in India, every year. This is the reason of nearly 9.6 per cent infant mortality. A major portion of children of the age group of 6 weeks to 6 years suffer from various nutritional deficiencies, especially in rural areas. Around 10 percent children suffer from the developmental delays which sometimes results disabilities and impairments.

The first step of project implementation of the RBSK will be carried out under the administration of DEIC units which will be there in every district of the country. The centre and the state will jointly operate in this health mission and support the scheme. The screening of the children at various levels will be organized and controlled by these centres. If there are any serious issues or some detection of possible disability at the facility level or the community level screening, then the DEIC will take charge and further course of treatment and management will be done by it.

How the screening process will be done in Community and facility levels?

The process of screening of health issues of the children under the RBSK scheme will be performed under two levels. One level of screening will be at the community level. Here, several mobile teams will be prepared which will consist of doctors and nursing staffs. They will work at the anganwadi organizations in the community. Also these mobile teams will serve in the Govt. schools and the school running under Govt. aid. Another level of screening will be performed at the facility level under the RBSK scheme. Medical officers, doctors, nursing staffs and ANM staffs will be responsible for screening of new born babies in the public health centres and the community health centres.

The Ministry of Health has set some guidelines regarding the members of the mobile medical teams who will serve at community as well as facility levels. The team members must possess the required educational qualification and medical experience. Each such mobile team performing medical screening under the RBSK scheme will have two medical officers or doctors. One must be a male doctor and another, female. They must have bachelor’s degree with authority to practice AYUSH. There will be one staff nurse or ANM in the team. And the fourth member will be a pharmacist who must have knowledge of computers and can handle data management tasks. DEIC will be the controller of all the mobile medical units visiting every schools and anganwadis.

Anganwadi centres will be the place of medical screening at community level, for children who are at pre – school level. All children below the age of 6 years will have medical screening in the anganwadis. The mobile health units consisting of 2 Ayush doctors, one nurse and one pharmacist will serve the anganwadis at regular intervals. Several medical factors like deficiencies due to poor nutrition, disease management techniques and the developmental delays will be checked. If there are any cases of developmental delays which may lead to disabilities, then the children will be referred to the DEIC for further course of treatment and management. This screening will be done twice a year, at least.

Procedure of screening at Govt. and Govt. aided schools under the Rashtriya Bal Swasthya Karyakram

Under the RBSK scheme, the Ministry of Health has decided to screen the school going children for several health management issues. The mobile health units will visit the govt. schools at least once per year. Also the schools which are aided by the Govt. will have the same screening facility by the medical teams each year, for at least once. The school children mostly belong to the age group of 6 – 18 years. They will be examined of the medical deficiencies, any diseases they are suffering or any possible developmental delays. Awareness for adolescence health issues will also be discussed.

All the funds required for this huge project implementation will be arranged by the NHM. They will be responsible for the fund flow and management of the RBSK scheme. As this scheme includes zero cost treatment and medical support to the children of age group of 0 – 18 years, the states and the centre must work together in efficient implementing and fund generation of the project the project. A total number of 27 crore children with age group of new born to 18 years will be beneficial under this scheme.