Army veterans continue to protest demanding OROP or One Rank One Pension scheme implementation at the earliest but the government continues to delay. What is causing the delay? Even if the government immediately implements the OROP scheme, will it be a logical move? What are the arguments in favor and against OROP? In this article, we will find out the answers of these questions that is bothering not just our armed forces but also the national citizens who depend on the soldiers for safety and security.

So, what is One Rank One Pension Scheme?

India maintains a vast army in land, air and water. However, our country needs army personnel to be young. Thus, the soldiers need to retire at an early age, facilitating the recruitment of new jawans. Indian soldiers stay employed until they reach the age of 35 years, after which retirement is mandatory. Only a handful of soldiers make it beyond that age and stay employed till 54 years of age at the maximum. Compared to this, civilians with government jobs retire at the age of 60. 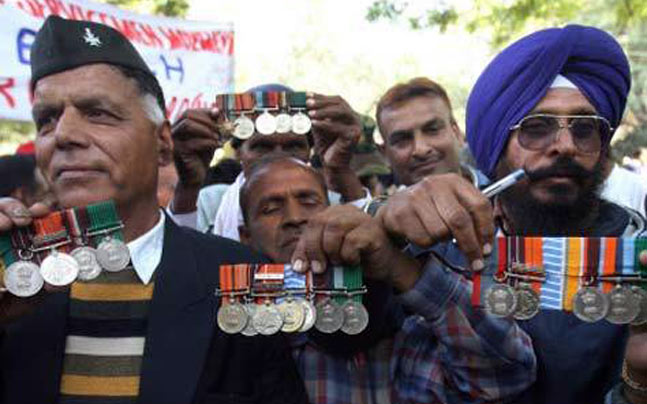 Because of early retirement, Indian soldiers fail to get multiple salary increments and often, their services end without earning any promotion. To compensate for this, Indian government pays higher pensions to retired soldiers.

The problem is that the amount of pension to be paid is determined by Central Pay Commission and is dependent on the last drawn salary. This is where the problem came up. A Colonel for example, who retired after 3rd Pay Commission decided the pension amount will continue to get the same pension but another soldier at the rank of a Colonel who retires after the 6th Pay Commission decided the pension will get a higher pension than the other person. Why? Because it is universally accepted that salary increases every year to adjust for market corrections and inflation. Thus, a soldier who retired recently will have higher last drawn salary than a soldier who retire 10 years back. Hence, the soldier who retired recently will have higher pension than the other person.

Thus, soldiers of same rank get different pensions only because they retired at different points in time. This is where the army veterans disagree. They are demanding that pension should be uniform for a particular rank irrespective of the time of retirement. Putting in simple words, army veterans are demanding that a Colonel (can be any other rank) who retired earlier should be eligible for the same pension amount as a Colonel who retired recently.

This is One Rank One Pension!

Arguments in favor of OROP

One Rank One Pension is a reasonable demand. Why? Let us break it in points:

With those points in mind, army personnel who retire early need to live with lower pension and lower benefits even at the face of ever-increasing inflation. This is not acceptable and it is the nation’s obligation to provide them with enough pension so that they can live a comfortable live. This is where OROP makes sense.

It is true that the demand for One Rank One Pension is very reasonable and logical. However, implementation of the scheme is not simple. The problems are administrative, legal and financial by nature.

Yet another problem with OROP

It is not that no corrective measures were implemented earlier. In fact, in 2009, ₹ 5,000 crores were spent by the government for bridging out the pension gap for retired army personnel as per recommendations of 6th Central Pay Commission. Jawans in Indian Armed Forces were the ones who benefited most out of that corrective measure. However, if OROP is implemented in current format, officers will enjoy high increments of anything between 10K and 20K while jawans will have to stay satiated with just a few hundred bucks (something between ₹ 525 and ₹ 1,720) of increment. This is not going to make things easy for the government because the jawans may end up dragging the issue to court, worsening the problem.

Central government maintains its stand on “One Rank, One Pension” Scheme

Central government made it clear that it will not budge from its decision of implementing One Rank, One Pension scheme for ex-servicemen. Though petitioners moved to the Supreme Court against this scheme, highlighting clauses of Koshiyari Committee, central government said that ex-army personnel pension will depend on their last post. All candidates, working in the same post will receive uniform pension. The monetary amount will not depend on their retirement date. However, Supreme Court suggested that central authority needs to send an official reply to the petition, submitted in the court. It seems that One Rank, One Pension policy decision is here to stay as judiciary cannot compel the government to change this kind of decisions.