Haryana is well known around the country for its richness in the field of farming. It’s rich not only in terms of agricultural land and farmers but also in terms of livestock with a population of 10 million. And more interesting than this thing is the fact that 6.7 million animals from this population are milch animals. Yep – Haryana is very rich when it comes to dairy as it has got availability of 660 gms of milk per capita, which is second best in the country and much higher than national average milk availability of 232 gms per capita. It’s clearly an asset that they can’t afford to lose.

The government is already well aware of these facts. As a result, it keeps formulating various schemes to maintain its power in the field of dairy farming. The latest initiative in that direction is introduction of a new insurance scheme for milch animals and their owners, and in this article we’re going to learn more about it. 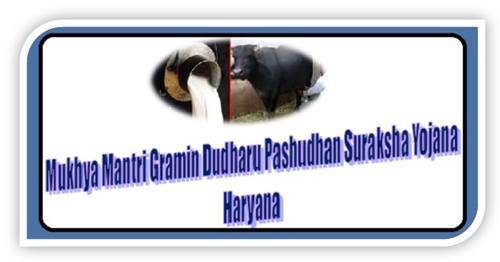 Under this scheme the owners of milch animals will be allowed to insure their animals for a sum of Rs. 20,000 INR – Rs. 50,000 INR depending on lactation yields of the animal. The annual premium required for the insurance will be Rs. 100 INR only, or less than that, depending on the animal. If insured animal dies due to any unfortunate incident, its owner will be provided the insurance amount in form of compensation.

The scheme won’t replace government’s already implemented Livestock Insurance Scheme (LIS) and will be implemented as a separate scheme instead. The aim of government with this new scheme is to provide some financial security to those farmers and milch animal owners who can’t afford to insure their animals under LIS or any other such scheme.

The government has laid out a criteria for the animals who can be insured under MMGDPSY. According to that criteria any milch animal yielding at least 1500 kg per lactation (around 7.5 kg per day) who hasn’t exceeded certain age barriers will be eligible for registration under the scheme. The age limit for registration of cattle is 10 years while for buffalo and goats it’s 12 years. In short, the criteria looks something like this:

How to Avail the Scheme

In order to avail this scheme the owner will have to get his/her milch animal registered with Veterinary Surgeon in Govt. and pay the annual registration fee of Rs. 100 per year (Rs. 25 in case of goats). The surgeon will register the animal, tag the animal and take a photograph of animal along with a photograph of owner.  The insurance coverage will continue to work as intended even if an animal is sold to someone else, as long as the new owner notifies the Veterinary Surgeon about his purchase.

Just like any other insurance scheme, the insurance amount won’t be paid in case of intentional slaughter, poisoning or clandestine sale. This should be a no-brainer, but there’re some other conditions too that can stop you from receiving the benefits promised by this scheme, which include:

In short, the insurance amount won’t be paid if insured animal dies due to owner’s negligence or any crime intentionally committed by him.

To settle the claims filed under this scheme a claim settlement committee will be set up in every district, which will comprise of following members:

If someone’s milch animal registered under the scheme dies and he’s eligible to receive the claim according to terms and conditions outlined above, he/she will have to inform the Sarpanch of his Gram Panchayat and submit a written application to the Veterinary Surgeon of his area. After receiving the application surgeon will arrange a post mortem of dead animal and a post mortem report will be generated.

Once he/she receives the post mortem report, the owner will have to obtain a claim form from Claim Settlement Committee, fill it along with required documents, and submit it back to the committee.  The documents required for submission along with form include:

Once these things are submitted by the applicant, the committee will verify all the details. If information provided by the owner is found true the claim amount will be credited directly to his/her bank account within a month of form submission.

In order to implement this scheme Haryana government will need a sum of Rs. 20 crore annually, which will be raised from following portfolio of schemes:

By the end of Fiscal Year if any money is saved from these funds of Rs. 20 crore, it’ll be re-invested in the scheme for financing next year’s expenses.

If an application isn’t approved or rejected within a month of its submission, or if payment of insurance amount takes a long time, the applicant can complain about it to ADC of District, Deputy Director of DADF or Nodal Officer of scheme in HLDB.