Punjab is a beautiful land of broad minds, brave hearts and straightforward people. Punjab is the land of brave people. It is famous because of many brave stories. In history, Sikh soldiers were always ready to face opponent, nullify them with all their might and have their blood willingly spilled in order to guard civil rights and freedom.

Who is Mai Bhago?

Mai Bhago One of the brave Sikh soldiers.  Mai Bhago was a Sikh woman who guided Sikh soldiers against the Mughals in 1705. She was the hero of that war because she killed a number of Mughals soldiers. After that war she is famous as saint in the Sikh community. 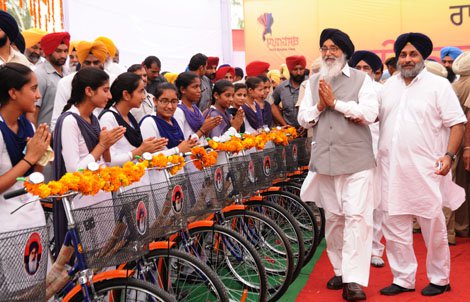 Mai Bhago was born in Jhabal near Patti. She was married with famous Sikh Bhai Nidhan Singh Varaich. She meets with Guru Gobind Singh Ji when she was young and her parents to her to meet him. She was staunch Sikh by birth that follows all the 5 rules of Sikh community for her whole life.

She ordered her husband to wait at home and take care of the house while she rode into fight herself against the Mughals. Mai Bhago required guarding an entire way of life from Mughals

She is always an inspiration in the middle of Punjab ladies. To promote Punjab ladies government announced many scheme on the name of mai bhago vidya. These schemes are basically for young ladies so that they can stand on their own foots. And can be so independent that nobody misuses them.

As in Punjab most of girls leaves their school after 8th class because schools are far away from their home. It is not easy for them to go to the school without any vehicles. And most of families in Punjab villages cannot afford vehicle for their girl’s child, so they are forced to leave the school. This is the reason that girls education rate in Punjab is very less.

This scheme was first started in 2011. The scheme was started by the Parkash Singh Badal led government. Under this scheme poor Sikh girls of class 11th and 12th will be provided cycles by the government so that they can continue their education and will not be forced by the circumstances to leave their school. They can also get the right of completing their higher education.

This scheme was for the class 11th and class 12th student which was later modified by amending low class students too. Owing to that cycles were given to class 9 and 10 girl’s students at the government schools.

This is the one of important scheme which is launch for the Punjab ladies only. This scheme is for authorize Punjab ladies and assist them to give more strengthen women particularly in rural areas.

The basic aim to launch this scheme is to make women independent from the ruler areas that are not well educated, under this women will provide help so that Sikh ladies can also set their small business and can fight against the circumstances like the Mai Bhago.

The help under Mai Bhago Istri Shakti Scheme will be accessible in any sector. It depends upon the skill of ladies. They can choose any of the sectors that are of their interest. Under this scheme many work involves like private enterprise, farming, Horticulture, Food Processing, Hand looms, fashion design, Stitching, sewing, Zari, craft work, Computer & IT enable services beside with soft skills and skills for the work place such as spoken English, Jeweler, Travel & Tourism, Hospitality.

Residence Proof that may be Electricity bill, Water connection bill, etc, Aadhaar Card, and Bank details are need before applying for the Mai Bhago Istri Shakti Scheme. Women can go directly to Central co operative banks in Punjab for applying for this scheme.

As the Mai Bhago stands as the iconic fact among the people of Punjab, government users her name on these schemes which the intention of motivating women across the state to participate in it. With the empowerment of women in the state, the government believes that it will impact a huge positivity in state’s growth by improving financial standards of respective families.