In 2013, the Tamil Nadu government has started a canteen service under the supervision of the chief minister Smt. J. Jayalalitha. Amma Unavagam, the mother (amma) canteen service is basically a chain of restaurants for the under privileged people of the society. In this scheme people who are economically unstable are able to purchase food in much cheaper rates than market price. The state government run scheme, Amma Unavagam has already successfully completed 3 years and still continues to serve a large portion of the state population. 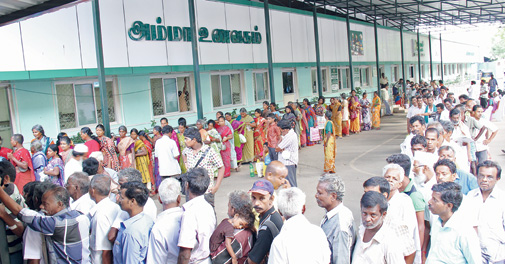 Beneficiaries under the scheme are the poor people of the state. People who belong to below the poverty line, economically weaker group and low income groups are eligible to avail the scheme.

Locations of the restaurants’ chain

Chennai was the main location where the restaurants started establishing. Covering 200 wards, the food chain has started its service in Chennai since mid of 2013. After the success of Chennai chain, the government has then started their operations in 9 more cities where you will find Amma Unavagam Food Services. More than 20 restaurants can be found across these 9 cities. These locations include Madurai, Tiruchirapalli, Coimbatore, Titucorin, Tirunelveli, Tiruppur, Erode, Salem and Vellore.

Foods under the scheme

Rates of the Foods (Thali price)

This canteen service was started in the year 2013 in Chennai. Within 3 months of time the service seemed to be growing and loving be people of the state. A security guard by profession told a leading newspaper that he and his wife had stopped having breakfast at home as the cost is much more for homemade food than this restaurant.

On the other an executive officer from a private company praise the Jayalalitha government by saying that poor people can’t purchase food, they can’t even visit hotels to have food. If this food chain wasn’t introduced many of the people would have left starved in the society.

State government of Tamil Nadu is still getting massive response from the people from across the state saying the food chain is one of the best schemes that has ever happened to the inhabitants of the state. Another person from EWS depicted that surprisingly the taste of the food is much better compared to the price.

Though the restaurant chain is serving a large part of the under privileged population but the government had faced huge loss while running the service. The Amma’s canteen is offering food at lowest price i.e. Re. 1/- per plate. That means on an average the service is incurring loss of Rs. 10/- per meal that is Rs. 30/- on daily basis for each person.

Now if the half of the state consumes food under this scheme then the loss amount will be nearly Rs. 100 Cr (considering 7 Cr populations in TN). That leads to Rs. 36, 500 Cr loss in a year which is definitely a huge amount for the government. In this case either the government has to cut down the other expenses like salaries of the government employee or raise the price of the food which is not likely to happen.

Also there is a huge chance of stealing food by the stuff and administration as it already happened earlier in the mid day meal scheme for the school kids established by Ramchandran a long time back. So with this amazing and subsidised food service the state government is definitely having a lot of financial issues.