5 months in business and the Pradhan Mantri Jan Suraksha Yojana has managed to amass 117 million enrollments. That’s quite a number of policy holders when it comes to sheer numbers. What’s really impressive is the amount of time the Yojana took to get that many number of enrollments. 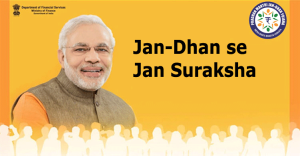 The Yojana was launched back in May 9, 2015 and incorporates the following:

While the whole concept is interesting and the progress made so far is actually commendable, there are problems. What problems? Well, we all know that there were, there are and there will be people who will like to make money in illegitimate ways. The world of insurance is not immune to this problem. There are people who make false claims to get hold of money. The same has happened with Jan Suraksha Yojana, reports managing director Kshitij Jain of Exide Life Insurance. Data reveals, according to Mr. Jain, that all participating insurance companies have actually faced fraudulent claims. However on the brighter side, Mr. Jain did say that the Jan Suraksha Yojana actually helped to spread and increase insurance awareness specifically in the rural areas.

Coming back to the Jan Suraksha Yojana, let us take a brief look into the three components of the scheme:

PMSBY: This is a non-life insurance, basically an accident insurance. This calls for a premium of INR 12 every year and promises a sum assured of INR 200,000 in case of accidental death.

PMJJBY: This a life insurance scheme which calls for a yearly premium of INR 330. The sum assured is INR 200,000. People within the age group of 18 and 50 are eligible for this scheme (both boundary ages included).

For the Jan Suraksha Yojana, the banks hold the pivotal role. Policy enrollment and policy claim settlement everything takes place through banks. This has become an advantage for the participating insurance companies because they need not break a single drop of sweat to penetrate into rural areas where many participating banks already have a significant presence. This, according to the insurers, has helped to pull down operational and distribution costs.

The Jan Suraksha Yojana is going to provide the much need push to insurance penetration in India which currently stands at a mere 3.9% of GDP. A study from Swiss Re stated that when it comes to life insurance coverage in India, it is only 3.1% while non-life insurance makes up only 0.8% of total coverage. This data of Swiss Re was for 31st March, 2014.