Sunrisers Hyderabad team is also one of the teams that had earlier managed to earn the title of IPL 2016 league. The winning team has also announced that it shall be retaining all its best team players for IPL 2018 season. The team will be retaining Seamer Bhuvneshwar Kumar for this IPL 2018 season as well. It is also expected that David Warner shall not be playing the IPL 2018 season on account of Ban imposed for ball tampering case. 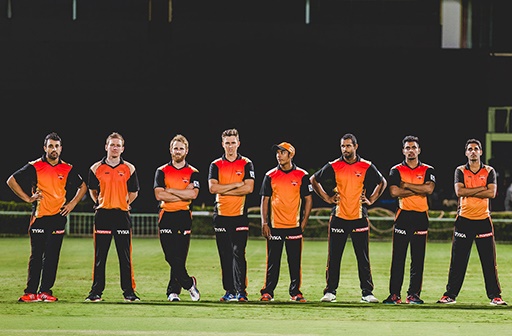 With IPL 2018 it is expected that SRH will be playing their 6th order IPL league. On 9th April the team will get a head start at their home ground against RR.

Tom Moody has been the coach of the team since its inception. The Australian played for Worcestershire throughout the 1990s. In addition to coaching the Sunrisers, he is also a cricket commentator who works for Channels Nine and Ten in Australia. Moody also has experience on the national level as he coached the Sri Lankan team from 2005 to 2007. He led the national team to a World Cup finals appearance in 2007. The team has not had any other coaches and has prided itself on its stability in terms of this important position for the team.

David Warner and Shikhar Dhawan are the only two players in Sunrisers history to spend at least a full season as a team captain. Dhawan was captain from 2013 to 2014. He left his captaincy position midway through the 2014 season due to inefficiency in that position but remained on the team.

During the 2013 season, Kumar Sangakkara and Cameron White were the captains. White replaced Sangakkara midway through that season. Warner’s tenure as captain marks the first time for the Sunrisers that there has been some form of consistency in terms of the captaincy for the team. Warner especially holds the record for having the best team win-loss record as a captain in the team’s history.

Sunrisers Hyderabad were formed in 2012 and started play in 2013. The team was formed as a replacement for the Deccan Chargers, another IPL team that had its membership terminated. The team started playing in 2013 and white they had two captains that year, they managed to reach the playoffs. The team was also in the Champions League Twenty20 but only finished in seventh out of twelve teams.

Much of the team players left in 2014 with only two players coming back. The team struggled to perform that year and was especially having a hard time competing outside India. This came as much of the season was moved to the UAE due to the Lok Sabha elections.

The 2015 season marked a time of stability as the team started to retain more of its players. It retains half its roster in that season as well as in 2016. During the 2016 season, the Sunrisers defeated the Kolkata Knight Riders and Gujarat Lions en route to the final where they defeated Royal Challengers Bangalore by eight runs. Bhuvneshwar Kumar led the league with 23 wickets. David Warner also led the team in runs with 848.

The name of the team comes from the ownership. Kalanithi Maran, the head of the Sun Group, is the owner of the team. He has become one of the wealthiest figures in India and has particularly held a strong interest in the national media.

The Sun Group operates much of the media around India. It runs the Sun Network, the Suryan AM Tamil radio station, the Red FM multilingual station, Sun Pictures, Tamil Murasu and the Dinakaran newspaper. Maran also held a share in Spice Jet for a period of time. Today Maran has a net worth of nearly $3.5 billion USD.

The team has not had any other owners in its history. The strong stability of the Sun Group and the wealth of Maran ensure that the team will not have to worry about struggles with money. This is different from many other teams in the league that have not been able to stay afloat due to a number of issues relating to finances and other key parts of team operations.

For CLT20 competition, the team only competed in the 2013 edition. They went 3-3 with one NR and finished in seventh place. The team defeated the Faisalabad Wolves, Kandurta Maroons and Trinidad and Tobago in the competition.

The team attempted to qualify for the 2014 edition of CLT20 but failed to get in. The CLT20 event has since been abandoned as of 2015. There is no telling if the competition will return or even if the Sunrisers would compete in it if that was to come back.

The 2017 season marks a change for the jersey that the Sunrisers wear. While the jersey has the orange and black colors that have been consistent throughout the team’s history, Adidas will be making it this year. TYKA and Puma have both made jerseys for the team in the past. The Adidas jersey will feature a orange tone with a slight fade effect. The sides will have a solid black color.

Huawei will be the new front sponsor for the jersey. The Chinese company makes an assortment of mobile phone devices and other tech products. The team has had a different front jersey sponsor every year with prior sponsors including makemytrip, WHSmith, Red FM 93.5 and Ultratech.

The back sponsor this year will be Royal Stag. The company makes whisky and is operated by Pernod Ricard. Spicejet and Idea have both sponsored this part of the team’s jersey in the past.

The jersey itself remains a popular seller among IPL fans. People can order their own jerseys through the Sunrisers website or at various other events. The design of the jersey especially stands out among what many other teams wear in the competition.

The team plays its home games at the Rajiv Gandhi Stadium in Greater Hyderabad. The venue holds about 60,000 people for a match. The venue has hosted four test cricket matches in the past with the most recent being held in early 2017. The stadium features a flat track while flood lights have been added to support night matches.

There is a secondary stadium for the team in cases where its primary one is not available. ACDA-VDCA Cricket Stadium in Visakhapatnam is a venue that has about half the capacity as the team’s primary venue. The Sunrisers moved a few matches to this venue during the 2015 season. Although the stadium is not as active in terms of hosting cricket as many other venues around India, it did host a test match in 2016 against England and has hosted multiple ODI and T20I matches.

The logo for Sunrisers Hyderabad features an eagle with a bright sun effect. The sun is added as a reference to the Sun TV ownership that runs the team. The logo has an orange and bright red tone to it as well.

The team has been heralded for having one of the best crowds in the IPL. The team’s games are known to be big occasions in Hyderabad with strong attendance and plenty of cheering all around. The team has also been known for having a strong emphasis on spinners over pacers. This is primarily due to the flat track used on the field.

The competition that the Sunrisers Hyderabad brings to each match is especially strong. The team has competed well over the year and has developed a plan to be competitive and strong over time. Fans of cricket will be very interested in seeing what will develop next.