There is a lot of fuss going on about a new kid in street. It is nothing other than the Income Declaration Scheme. Regular and honest taxpayers can safely ignore this scheme because they are responsible citizens and they pay their taxes regularly. Unfortunately, not everyone is so regular or even that responsible. The worst part, many people keep their incomes undeclared to dodge taxes. This isn’t a good idea. The income tax department eventually finds it out sooner or later. That’s when all hells break loose on those people who hide their income.

So, what precisely is Income Declaration Scheme?

May be it does sound cruel but it is actually a noble move by government. The government actually gave an opportunity to such people who do not pay their taxes properly and keep their incomes hidden. Under this Income Declaration Scheme, people will get an opportunity to declare the income they had been hiding before. As end result will be that the government will levy taxes on such income and calculate all penalties and surcharges and take away the grand total. The total money that the government will take will be up to 45% of the income declared under this scheme. 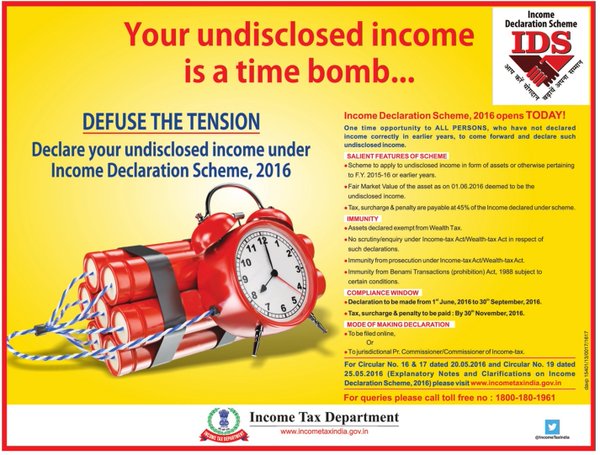 However, there is one big time benefits of this scheme. People who come forward and declare their income will no longer be prosecuted and they will get immunity. People who do not comply and ignore the Income Declaration Scheme will have to face the wrath of law once the income gets disclosed. When that happens, the ending won’t be happy. It may happen that not only the undeclared income is seized by the government but also, the person failing to declare his or her income may be prosecuted and jailed. That’s never a good thing, is it?

What are we going to learn in this article?

Now that we have a floating idea about Income Declaration Scheme, let us find out what we are going to learn in this article. This article will contain the following:

An Introduction to the Income Declaration Scheme

A quick table should help here.

Purpose of the scheme:

Give an opportunity to Indian citizens to declare their undisclosed income and pay the necessary taxes so that they can enjoy immunity and avoid prosecution.

Eligibility criteria for the scheme:

Who are not eligible for the scheme?

Just like there is an eligibility condition, there is also a condition under which the scheme becomes inaccessible to some people even if they are Indians and they belong to any one of the categories mentioned above.

The condition is that if a person is involved in any kind of legal action taken against him or her by the government either under the Income Tax Act or, as a matter of fact, any other Act (a clean list of which has been mentioned in the Income Declaration Scheme), he or she cannot opt for this scheme. That person needs to undergo the legal process and action will be taken against that person.

Target audience of the scheme:

The scheme is primarily meant for those who deliberately didn’t disclose their income in order to evade taxes. However, if person accidentally forgot to declare income and pay taxes, he or she can also opt for this scheme to avoid any future mishap. How can that be possible? Well it may happen that a person purchased an asset using the income he or she earned. That asset falls under the purview of capital tax. It may happen that the person didn’t intend to hide the asset but actually forgot it. So, this scheme will give the person to declare that asset and pay taxes, if any.

Scope means, what exactly can be declared under this scheme. The scope of the IDS is defined as:

How much is to be paid under IDS?

That’s a hefty amount totaling to 45% of the overall income that has not been declared. The breakup for this is given below:

Are there any benefits of Income Declaration Scheme?

Since the scheme is all about taking away money, it may look like there are absolutely no benefits. However, that is not correct. There are some obvious benefits of the IDS, which are mentioned below:

What if one doesn’t comply with IDS?

Isn’t that evident? Still, here is what will happen in such a case:

What are the important dates for this scheme?

Here are the important dates that one needs to remember:

Are they any specific forms that one needs to use?

Yes there are special forms that one need to use. Actually, there is only one form to begin with. This is known as Form 1. This form can be accessed via the e-filing portal. Let us take a look at Form 1 and the forms that will follow.

Form 1: Can be availed online from e-filing portal. It is a declaration form and should be filled up within September 30, 2016. The submission will also take place online. A digital signature will be required. In case the digital signature is ditched, one needs to opt for the electronic verification code.

One can fill up the form directly at the online portal. If a person is not comfortable doing so, he or she needs to download the form. The form will be downloaded in what is known as XML format. The downloaded form can be printed and filled. The filled form has to be scanned and the scanned copy of the form has to be uploaded at the e-filing portal.

After the Form 1 has been submitted, the Income Tax Department will acknowledge the same by issuing what is known as Form 2.

Form 2: This is basically an acknowledgment form. There is nothing to be filled here. One simply needs to keep it with himself or herself. The form will be issued with 15 days from the date when the Form 1 was filled and submitted. After a person receives the Form 2, he or she will have to pay taxes on the newly disclosed income at the rate of 45%.

Challan 286: The tax that one has to pay has to be paid using Challan 286. This is the challan that has been associated with IDS. No other challan will be accepted.

Form 3: Once the payment has been made, a person needs to provide a proof that he or she has made the payment. This proof is to be provided using Form 3. One needs to fill up Form 3 and submit by November 30, 2016. Apart from filling up Form 3, the payment proof has to be attached too.

While using Income Declaration Scheme, it is very much important that a taxpayer should have the undisclosed income (and all assets purchased using that income) properly valued. The money paid as taxes under the IDS is completely non-refundable. Hence, if proper valuation is not done, one may end up paying more than what is actually due as per the rules.

Getting details for undeclared income

It is important for the taxpayer to provide the following details:

In case the undisclosed income has not been used for purchasing any asset and can be easily accessed, a person has to simply provide the amount. However, the problem will come when a person used that income to purchase some kind of asset. This is where valuation will be required.

The following assets come under the purview of IDS:

The question is, how to evaluate Fair Market Value of assets?

Some guidelines have been issued by the income tax department. Here are those guidelines:

You need to get report only from a registered valuer

It is really important that you get the valuation done by a valuer who is registered. The valuer will issue a proper report. The question is, how do you find such a valuer? In case you don’t know one, head over to this link. Towards the end of the page you will find a list of valuers. This list comes directly from the income tax department and hence, you can select any valuer.

What will be the fees of the valuers? This is a concern because a valuer will not go for valuation unless he is paid for his/her services. Here is the fee structure you will have to encounter:

The charges mentioned above will not include the service tax. That will be levied separately.

Do you have a Digital Signature?

The problem is you will need the form first before you can go and upload it. In order to get the form, go to ‘downloads’ section. There you will find a Java Utility. This Java Utility will be generating the form. In the downloads section, use this path to get the said Java Utility:

Downloads >> Forms (which are not ITR forms) >> Income Disclosure Form 1

Click on it and the Java Utility should be downloaded. Now extract that utility. Right click for opening JAR file. This will give you a fillable form.

Now fill up this form. Remember that all the fields in this form are mandatory. You cannot skip any. Once you have filled in all the fields, click of the option which reads, Generate XML.

Once the XML is generated, you will have to upload it. Now you need to go back to e-file tab you saw first and the to Upload Form 1 option.

From there, upload the XML file. If the upload is successful, you will see a message on the screen. You will also get an email from the IT department to your registered email ID.

Remember that when you try to upload XML file, you will have to:

After you have uploaded the XML and submitted successfully…

Once Form 1 has been submitted, you don’t have to do anything until the income tax department issues the acknowledgment form which is known as Form 2. This will not be issued immediately. It may take 15 day from the last day of month in which Form 1 was submitted. So, you have to wait.

Assuming that you have received Form 2 (i.e. acknowledgment), you will have time until November 30, 2016 to pay the taxes. For this, you will need to use the Fair Market Value of the undisclosed income or assets that you have purchased using that income. You need to pay 45% of the income as income tax / wealth tax. For this, you will have to use Challan 286. You cannot use any other challan for this purpose.

After you have paid, you need to inform…

Once you have paid the taxes, you will have to now inform the income tax department that you have been a responsible citizen and you have paid the taxes. For this, you have to use what is known as Form 3. This form can again be accessed from e-filing portal. However, you need to remember that you have to pay everything that is due. This also involves the Krishi Kalyan Cess. If you are not paying that cess, the tax payment is incomplete and it will be considered a violation or misinterpretation. Hence, pay everything using Challan 286 and then give all the details in Form 3. Once you fill in Form 3 and submit the same, wait until you receive the acknowledgment or certificate of declaration. This certificate in known as Form 4. You won’t get Form 4 immediately. It may take up to 15 days to receive the certificate from the date on which you informed the income tax department that you have paid the taxes and uploaded the proof of such payment.