Agriculture is the backbone of India. Most of the citizens of India are from rural and village community which is still now relying only upon agriculture. Being one of the country with rich agricultural resources, there are many agriculturalists taking some of the wrong decision and ending up their life. This is one of the biggest problems for the ruling parties in India as they were concerned about the lives of those people who are relying on the agriculture for their survival. 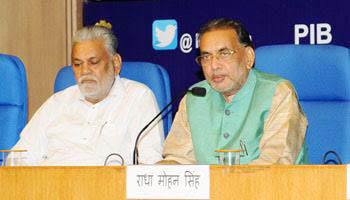 To safeguard the lives of poor agriculturalists and to make sure that they are having a better life standard and income, government of India has recently introduced one of the most revolutionary scheme, which is National Agriculture Market (NAM). The idea behind forming such groups is to make sure that agriculturalists can now make their own decision on what price they must be selling rather than just listening to the words of money minded commission agents and wholesale stocking agents.

The idea behind this National Agriculture Market (NAM) is to make sure that all people involved in agriculture must know about the price for the product which they are selling in rest of the India and how well it is being trending in both price and quantity. If agriculturalists are very well informed about these details, they can now make their pricing decision in an opt manner and make sure that they are deciding their own selling price rather than going with the decision that is made by a third party.

To take NAM to the next level, government of India has now introduced another revolutionary thing in this field, which is nothing but e-NAM. The entire website of NAM is now available in the form a little app which can reside easily in most of the android model mobile phones. With the help of e-NAM, it is now very easy to check for useful information about agricultural products and it’s pricing without any necessity to go to a computer center or any other places.

The advantage of making use of the app against the regular website is as follows:

At the current point of time, the project has not reached many people in India. There are also attempts made by government to take it across people in agricultural background and make the scheme of e-NAM to be a great success in the field of agriculture and farmer welfare.

Ministry has recently told that there are many attractive changes now made in the aspects of e-NAM which will also now reflect in the app too. If this is the case, then it will be a boon for all farmers and agriculturalists in India as there will be flat pricing across the country and also it will benefit farmers from poor background as they cannot be fooled anymore by the commission agents. Farmers can now get all updated information with the help of e-NAM app which helps them to decide about the pricing with real time data.

At the Launch Event

Union Minister of Agriculture & Farmers Welfare, Shri Radha Mohan Singh recently launched the e-NAM App in New Delhi along with the state minister Shri Parshoottam Rupala. On the launch occasion, the respected union minister announced that 250 markets across 10 states of the nation get connected with the e-NAM mobile App. Also he insists that in nearby future the app will be integrated with around 350+ mandis from 14 different states.

On quoting the success of e-NAM platform, the minister conveyed about Rs.421 crore was transacted under the platform and over 160K farmers, around 47k traders along with 25,970 commission agents are registered on the e-NAM platform and those numbers are expected to increase further. On considering the target set in the first phase of e-NAM platform of reaching 585 markets by 2018th March, the platform is about to attain 400 markets within the end of March 2017.

As we live in the digital world, the launch of the e-NAM mobile application would enable farmers to get access with the National Market with wide options to gain more profits.

The e-NAM (National Agriculture Market) app has been updated and launched with much better and improved new features. According to the updates, new features have been updated to the mobile app making it more user friendly.