The state government of West Bengal has started a campaign called ‘Didi Ke Bolo’ to resolve unwanted issues of the people live in the state. The campaign is focused on resolving issues that may hinder the upcoming assembly election. The initiative was taken by the Chief Minister of West Bengal, Mamata Banerjee, to reach out to the mass before Bidhan Sabha election, 2021. Soon after launching, the registration has been started, and a contact number is give on the portal. People of West Bengal can lodge complaints directly to the CM of the state. The launch details are given below in tabular form. 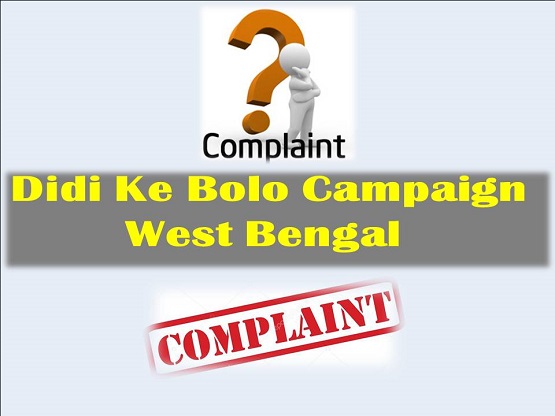 Objective of the scheme-

As the objective of the campaign is to take care of the people whenever they face difficulties; it is believed that the state government will be able to reach to the mass.The campaign will strengthen the connection between people and government that will be effective for the party in upcoming assembly election.

Uniqueness of the scheme-

This is the first time such kind of campaign was launched in a state of India by Trinamool Congress, the ruling party of West Bengal.

Benefit of the scheme-

The campaign is providing both the facilities of lodging complaints through the portal or call at the given number directly to the CM of the state.The authority believes that resolving problems in the grass root level will help to deal with the corruption.

To make the campaign effective and successful, 1000 leaders of the ruling party will visit the rural areas of the state in three months.

Political importance of the scheme-

As the campaign is launched for the people of West Bengal, therefore, in order to lodge your complaints you need to be the permanent resident of the state.

Criteria related to age and gender-

The campaign is entitled to all the people of the state regardless of age, gender, religion, class, etc.

To register you need to produce your address proof like voter ID card, ration card, or Aadhar card.

You need to call from a registered number, and if you want to lodge complaint through the portal you need to provide an authentic email address.

How to Complain In Didi ke bolo ?

The campaign to listen to the people directly is needlessly a commendable step taken by the ruling party of West Bengal. According to the authority, the step will bring immense success to the party, and will be beneficial for the people as well. The state authority is trying to tighten the administrative system.  The objective of the scheme is to help the people who are in dire. The campaign is believed to give voice to the people of the state who cast their vote to restore their citizen right.