India is mostly filled by the villages rather than the cities, people from the rural villages held the productivity in the form of agriculture which is considered as the back bone of the nation’s growth. In recent years, people in villages seems to be facing hard times because of the improper monsoon rainfalls and not proper irrigation system to do their farming activities, owning to that many villagers prefers to move towards the city in order to look after their life’s. 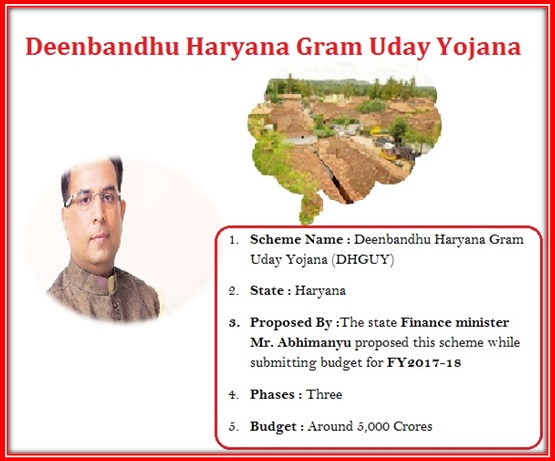 Here you can go for All Pradhan Mantri Yojana

With the intention of stopping people getting migrated to cities and town by leaving villages, the both central and state governments of India introduces several schemes and welfare plans to develop the village infrastructure and to boost the agricultural activities among the villagers. On following those steps the state government of Haryana established a new scheme named ‘Deenbandhu Haryana Gram Uday Yojana (DHGUY)’ in order to safeguard the villagers and to increase the number of villages in the state of Haryana.

The scheme DHGUY mainly focuses on the development of the rural villages which don’t have necessary infrastructure standards. The scheme was proposed in the name of the iconic leader in the existing majority community of the Haryana state Jat.

“The state government of Assam has started a scheme for ruler areas, you can read Main Features Of Samagra Gramya Unnayan Yojana Assam.And for developing the transport system in the state,Odisha government has started Biju Gaon Gadi Yojana.”

“For improving electricity status specially in rural areas, Deen Dayal Upadhyay Gram Yyoti Yojana has been started in the whole nation. And Rashtriya Gram Swaraj Abhiyan Yojana has also been proposed by central for promoting panchayat raj in the nation.”

Here you can go for All Mukhya Mantri  Yojana

Government Contribution for this DHGUY scheme

“Improving the infrastructure of the rural areas of the state, Maharashtra government has started a scheme, you can read here How to Register in Village Social Transformation Mission Maharashtra.”

Highlights of the state budget proposed by the State Finance Minister

Without any inclusion of the new taxes for the state people, the minister proposed two new schemes by referring the iconic leaders Chhotu Ram and Mangal Sein who are often worshipped by the fellow community members in the state of Haryana.

Eventually both schemes will be targeted to achieve the development of both the rural villages and as well as the urban cities of the state. By launching these special schemes, the state government of Haryana makes sure that the living standards of the both urban and rural places in the state will be pretty equal.