“To enhance the condition of the rural areas Saansad Adarsh Gram and Rashtriya Gram Swaraj Abhiyan have been started.” 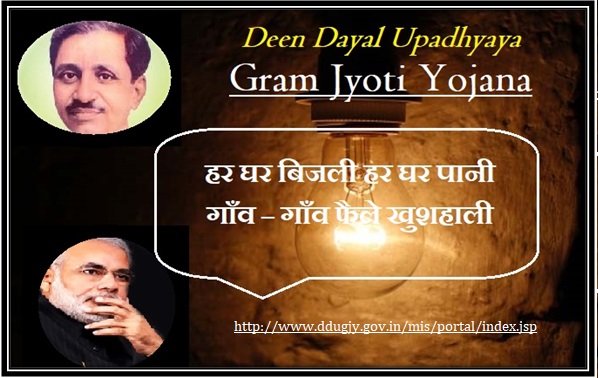 “State governments are also working for increasing the status of villages. You can read about some yojanas

The scheme will fetch Rs. 76000 Cr for the implementation. Rs. 63000 Cr among this hefty amount will be paid by the Indian central government as a grant. The as of now nearly 14680 Cr has already been approved by the central authority. Among this approved amount Rs. 5827 Cr have been approved only for the state of Bihar. As it has been seen that Bihar is one of the backward states in India, especially in case of agricultural development, the central has allotted this much of amount for Bihar under this scheme.

The PM of India has selected Patna, Bihar as the place to launch this dream project. The DDUGJY scheme has completed almost one year of operation in the country. A similar scheme was already functional in the state of Gujarat, before this scheme.

“Improvement in the transportation section is the key task in the goal of developing rural areas. Government is also working in this sector by the schemes of Pradhan Mantri Gram Parivahan Yojana and Pradhan mantra Gram Sadak Yojana.”

There are several benefits to the DDUGJY scheme, which are as follows:

In Bihar, 99.3% of total villages have been electrified under this scheme. Uttar Pradesh and West Bengal show 99.9% of the total villages where Andhra Pradesh has shown 100% electrification under the scheme in India.