The main objective of BBPS is to bring up a integrated bill payment system in India that will include customers, agents, payment modes, etc. so that the bill payment procedure becomes more efficient, quicker, and hassle free. 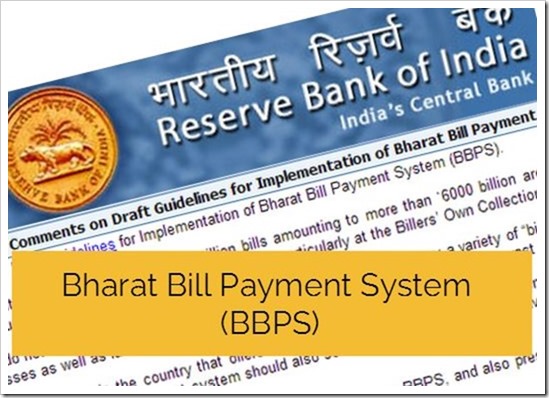 The system participants of BBPS

Eligibility criteria laid down for the participants

Migration of biller in case of exit of BBPOU

Two cases have been mentioned by the BBPS under which the billers may migrate, they are

In any situation if a BBPOU wishes not to be a part of BBPS any longer then the entity can file a resignation application with a notice period of 60 days. The letter has to be given to the BBPCU and then the BBPCU will conduct and audit and then the resignation will be accepted. Before the acceptance all the outstanding dues and liabilities have to be met by the entity that is resigning. Before the final acceptance of the resignation the RBI has to be asked for the approval. Once this is done the other participants of the BBPS system will be informed about the resignation and the network with the resigning BBPOU will be disconnected.

The billers will be listed to the BBPS system after they have sent a formal request to the BBPOU under which the biller wishes to be. Approval of the listing will be given by the BBPCU. After the fulfilling of all the required formalities the biller will be taken into the system of BBPS. After this process the BBPOU will add the entry of the new biller to their networks. Along with this all the system participants of the BBPS will be notified about the joining of a new biller to the system. Once registered under BBPS, each of the biller will be issued a unique biller ID.

Notification provided to the system participants

The system participants will be notified in the form of email, letter or circular about the following-

Registered Customers Pay- The customers will be given an option of registering to the BBPS. There will be no compulsion and the customers who are registered, their data will be stored in the BBPS system. If registered, you can pay as a registered customer and your process will be made further simpler. It will be a one-time registration process and you will be given a customer ID as well which you can use for all your payments.

Quick Pay- Even without registering to BBPS a customer can pay bills through BBPS. One just needs to visit any of the BBPS outlet or website and then enter your bill details and pay the amount without any problem. With just a certain level of verification of the customer and the billing amount the payment process will be processed and the procedure will be completed.

Mode of Payments and the flow of each

BBPS has mentioned that it will accept all modes of payments like cash, debit card and credit card, online banking, IMPS and Prepaid Instruments like wallets.

In the case of cash payment- when paying by cash the customer has to share information such as Biller ID, Customer ID, amount and type of payment with the agent. Subsequently the agent will also input the biller ID and the customer reference account number to the BBPS system. Once the bill amount is confirmed by the customer and then that payment will be made. After this a payment receipt will be given to the customer in the form of a SMS or paper receipt.

Payment by card- In case the customer chooses to pay by card, debit or credit card, then along with billing and customer ID details the customer has to enter details of the card type. There are some extra verification steps in this process.

Payment by Net or Internet banking- for this kind of payment of bill the customer would require to provide their account number. And then rest of the procedure remains the same.

It has been clearly mentioned that any form of refund procedure has to help outside the BBPS system. But then it is mandatory for the biller to make updates about the refunds into the BBPS system.

The transaction information for each of the bill payments will travel to the further respective clearing and settlement network. The system will be such that the BBPS transactions have a BBPS identifier and a mode of payment identifier. This will help to identify and note the transactions under the BBPS.

It has been said that BBPCU will be issuing the amendments relating to BBPS from time to time. The guidelines would be revised timely and the modified version of the amendments would be issued for the reference of the participants. There will also be enough time given to the participants of BBPS to comply with the revised set of rules. As the members join to the BBPS system them will be bound by the amendments applicable in that particular time. Mostly a notice period of 30 days would be given before the revised guideline are made effective. The member can reply or react to the changes and notifications within 7 days of the issue of notification.

The BBPS wants to build a strong brand image in the country and attract the maximum number of customers and companies to it. They have set down certain advertising rules that all the members of the BBPS have to follow, the participants of the BBPS have to use the BBPS logo as well. Here are the rules-

BBPS makes it mandatory that the BBPCU and the BBPOUs of the system would make sure that the exact chargers incurred by the customers would be adequately displayed in the transaction receipt and the outlets of collection will have the details id the charges that are levied on the customers. The BBPS aims on maintain the required transparency with the customers and the other participants of the BBPS. The time taken for the settlements would be displayed clearly on the bill collection outlets of the BBPS. This would give rise to not confusion. The people posted in the collection outlets of BBPS would be properly trained and will be well informed about the procedure of collection. They will be able to handle all the customers’ quires and complaints with no delay.

With these guidelines the BBPS will try and establish a bill collection system that is fraud free and is efficient enough to make all the process simpler and quicker.