To encourage girls’ education in the state, the Andhra Pradesh State Government has started a new scheme namely Badiki Vastha Scheme. Under this scheme school going girls will get bicycles from the state government. This scheme has been launched so that girls attend schools on regular basis. 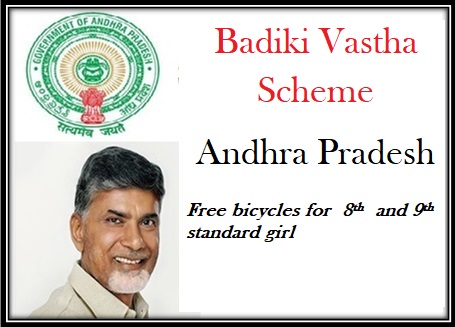 The scheme was originally launched in last academic year 2017-18. At that time, the CM of the state has declared that only 9th standard students will get the cycles. This year, in 2018-19, the scheme has expanded, according to the CM. Now, students from 8th standard will also be eligible to receive cycles from the government. In Guntur, Andhra Pradesh, the CM has announced about the expansion of the scheme on 30th May 2018.

Eligible students are needed to contact the principal or the head of the school they are studying to apply for the scheme. Further process will be done through the school officials.

As said that the scheme has started last year, the work in progress wasn’t really well by the state. Among 1.80 Lac students only 1 Lac cycles were being distributed among students. On the other, the website shows only 50,000 photos of the students receiving the cycles from the state department.

Overall the scheme wasn’t as successful as promised last year. This year the state has focussed on the scheme more so that the state can successfully provide the benefits to all the beneficiaries within a year.

According to the officials, students, especially girls, are required to pursuit their studies, at least till class 10. Due to absence of students, most of the high schools are getting merged with other schools. This creates hassles among students and also they are not getting proper education as per their course. Among many initials taken by the states to encourage school education, this is one of the leading schemes in Andhra Pradesh. As per the reports, the state will soon implement this scheme in several schools.