It is always a general thing that is followed in India and all over the world by the political people to give some exciting statement by the time when they are going for election campaign. One of such statement given by Akhilesh Yadav in the recent day is that he is going to give free mobile phone for those people who are coming under the category of BPL. There are many initiatives taken by both central and state government to bring digital technology across various divisions of the society. 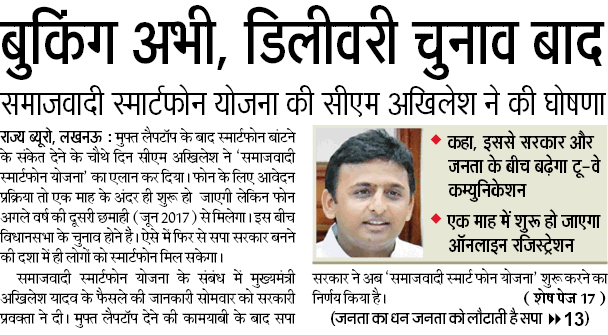 The initiative of SSY seems to be one of the fore runners in the field of digitalization. Even when the scheme seems to be one of the words that are given by politicians on the verge of election campaign, this scheme is something different which has been introduced in India. Rather than just stopping by giving a false confirmation to people, government of UP has also taken some of the initiatives to start the process if they are going to win again in the elections scheduled to be held during 2017.

What is the Samajwadi Smartphone Yojana Scheme?

Within the free smartphone scheme, Akhilesh Yadav has decided to distribute free smartphones to the people of UP who are eligible for voting. This initiative was taken up after the UP government launched the free laptop scheme. The residents of UP will have free smartphones now. Interested people can register from the official website of Samajwadi party. It has been announced by the CM that smartphones will be available for each and every poor and economically backward families. All you need to do is register through few steps and that’s it. The scheme is a part of the digital India campaign initiated by our PM Modi.

This yojana is for all the students who have successfully passed 10th class. All eligible students will have to have the 10th pass certificate from UP and an ID proff.

As soon as the idea of this scheme has been proposed, there are many mixed comments begun to flow. The first thing that most people questioned is that on what basis the eligibility criteria are going to be defined. Government of UP later came with a clarification that they will be selecting people for whom the yearly salary lies below 2 lakhs and provide support for them to enter into the digital domain.

One more question that SSY has raised among common people is that how poor people can register for the scheme through online, by visiting the official site http://samajwadisp.in/public/index.php and by selecting the link provided under the scheme name “Samajwadi Smartphone Scheme”, now registers the details which are required by that web page, along with valid mobile number.

The ultimate aim of this scheme is that it should be beneficial for those people who don’t have any access to digital technology. In such a case, it is not fair for government to expect poor people and farmers to sit in front of computer and register under Samajwadi Smartphone Yojana. UP government must

In the recent days, there are some big giants like Reliance taking several initiatives to deliver mobile technology across width and wide in India. This scheme may be one of such consequences according to perception of many people. If government is providing BSNL SIM cards in this scheme, it is most appreciable. If the scheme is going to be introduced as a joint venture from private vendors, then it will be considered as one of the marketing program.

How many members from a single family can apply for Smartphone?

As long as the members satisfy the eligibility criteria they can apply for the Smartphone. There is no upper limit for number of registration.

Can a citizen of UP living outside the state also apply for the Smartphone?

Yes, as long as the person is citizen of UP he / she can apply for the same. But the verification will be done in applicants UP home address only.

After successfully submitting the application form, can a person will get the right of having Smartphone?

No, after submission of the form there will be a complete verification process. Once the verification is done by the officials the phones will be delivered to the selected applicants.

Though, the scheme has been portrayed as in aspect of upcoming election in 2017 by opposition parties, the SSS (Samajwadi Smartphone Scheme) would be handy for the unemployed youths in the states to get up-to-date information regarding job opportunities and to stay connected with digital India.  The scheme features, forecasting various government schemes, available jobs in the state, also the competitive exam details conducted by the state government.